I’ve been in Canterbury almost two weeks and I can definitely see myself coming back. I love this historic city of pilgrims. The days are mostly sunny and the temperatures are perfect. We had a tremendous thunder storm last night, but still no rain during the day.

I’ve adopted the European shopping habit of going to the market every day to pick up what I need for supper and the two lesser meals for the next day. (I love that I can buy one beer at the store. That gives me a chance to sample many kinds.) I figured out the oven (after one false start) and roasted a lamb shoulder. I pan-fried fresh salmon with seasoned rice, and tonight I’m making stir fry. These larger cooking fests make enough to last two days. And I finally figured out the washing machine. 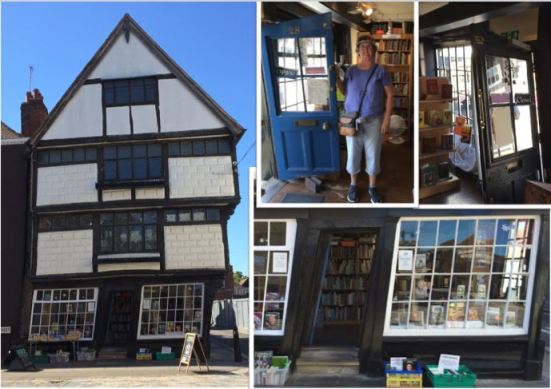 I already have a favorite thrift store where I bought a shirt and dropped off some items that I wasn’t wearing. (There’s only so much room in the suitcase.) And I love the quirky Catching Lives Used Bookstore where I can leave books that I brought along but have finished reading. It’s a charity for homeless people. I’m getting used to people calling me “Deary” “Love” and even “My love” – I like it. But I don’t say it back; that would be too cheeky. Yes, life is good in Canterbury.

But good food, favorite shops, and weather aside, what I really love about this place is its lively vibe. People stream into the city centre from all over. I hear so many languages spoken, so many people wandering High Street. Musicians play on several corners (a surprisingly large number of accordions!), just far enough away from each other not to interfere. Most are good enough to make me want to pause and listen.

Sidewalk cafes do a lively business, and the delicious smells coming from the restaurants entice the nose. Most streets in the city centre are restricted to pedestrians only and the odd delivery truck. Good thing, because they are packed, especially on the weekends.  And yet, there’s a reserve about the crowds, as if they’re modern-day pilgrims, here to recognize the special significance of the city’s UNESCO World Heritage sites.

The City Centre exists inside the walls. Outside is traffic and the larger Canterbury. But few private gardens inside.

I love the history all around me, the Roman walls, the medieval city, the historic houses sitting right on the street. But it is this same architecture that sometimes leaves me feeling unsettled. There’s no nature. Unlike other English cities with their houses that have small front gardens, there was no planning for this back in the middle ages. People do what they can: many shops and houses set out large hanging baskets of flowers. But in general, what one sees is houses directly fronting sidewalk and sometimes the street.

I must have stumbled upon most of the green spaces in the city centre on my initial walk. They aren‘t particularly close or on the way to High Street, so I’m not getting to them regularly. I was feeling a lack of nature. I should have consulted a map, because I’ve been walking right past the inconspicuous entrance to a bit of heaven for almost two weeks, and only a block from my flat!

When I saw a family coming out, I stopped to read the sign, then went in. (This is one of the advantages of traveling solo: I can change my plans instantly.) Walking along a footpath past a couple of cottages, and then over a foot-bridge, I immediately fell in love with Greyfriars Gardens. 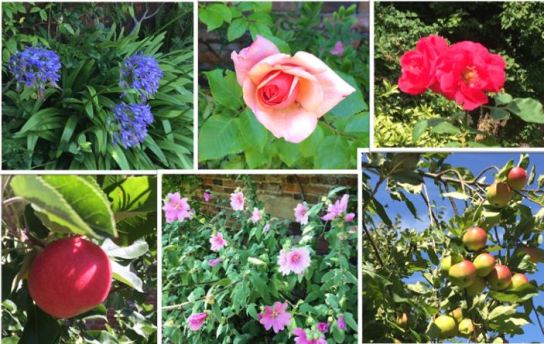 Inside, I found paths with woods, a natural meadow, the Stour River, formal gardens, foot- bridges, pear trees, several kinds of apple trees, roses, and the Greyfriars Chapel, originally the Greyfriars guesthouse, which straddles the river. It appears that the visitors are mainly local folk: moms with young children in strollers, young people enjoying a picnic on a blanket, dads pointing out the fish and ducks in the river to their kids, people reading or playing their guitar softly. And it’s all free, though if you visit the Chapel, you can give a donation. The two lovely volunteers there talked so earnestly that I feel compelled to share a bit here.

St. Francis of Assisi started the Greyfriars order in Italy in 1210. Before he died in 1226, he sent nine Greyfriars to England in 1224. Five of them settled in Canterbury, setting up huts on the current meadow. A wealthy citizen donated the land to them. 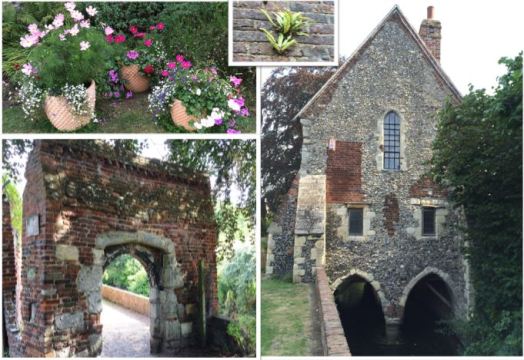 They built quite a community in the following 300 years, but in the Reformation of Henry VIII, all of the buildings, except the guesthouse, were destroyed. It was saved because it had been given to the people of Canterbury and had no religious purpose. In fact, it was likely a mill. The building has been owned by many different people/groups since then. It even served as an overflow prison at one time. Today the Eastbridge Hospital owns it and has put a chapel in the upper floor where services are held on Wednesdays. It’s lovely. 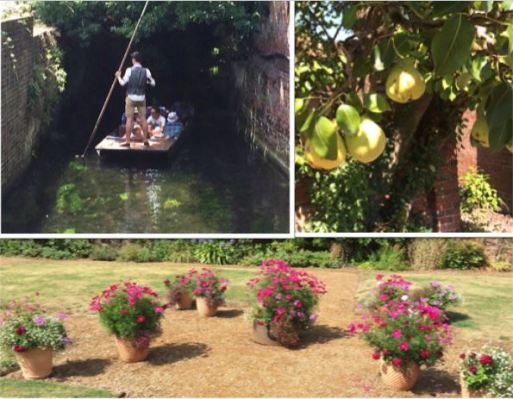 So now, I pop into Greyfriars Gardens about once a day on my way to or from High Street. When it’s cool and I need sun, I go to the formal garden or the meadow. When it’s warm, I stand in the shade of the pear tree and smell the ripe fruit that has fallen on the ground. 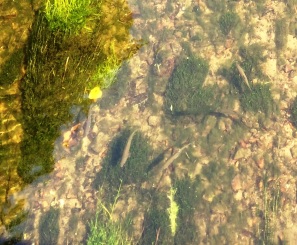 I watch fish dart up and down the river in schools and listen to them splash as they grab a morsel. I study the bees visiting the flowers and almost need to shade my eyes with the brightness of the colors. And I enjoy seeing people on the river cruise. There’s almost always a punt coming through on the river with a guide talking about this, my secret garden.

It’s a serene bit of nature, a peaceful retreat. A chance to get lost in the now. I am so blessed to have found it.

For other essays from this trip to England see:

Fighting with the washer in

Punting on the River Stour in Canterbury, UK

Can a beachcomber ever be satiated? Collecting at Lyme Regis UK

I'm a writer and author. Check out my book, Manifesting Paradise on Amazon, and my blog, ManifestingParadise.com. I talk about Hawaii and the transformation tools I used to achieve my dreams.
View all posts by Diane Scheurell →
This entry was posted in enjoying other cultures, learnng new things, self care, thifting - thrift stores, Travel and tagged Canterbury City Centre, getting lost in the now, Greyfriars Chapel, Greyfriars Gardens, needing nature. Bookmark the permalink.

6 Responses to Living like a local in Canterbury, UK (and finding Greyfriars Gardens)