Bergen – Sognefjord boat and Flam Railway trip with a hiccup

August 2019. Our second day in Bergen, the plan is to take a five-hour boat ride up the Sognefjord, Norway’s longest (127 miles) and deepest (4,291 ft) fjord. Then we’ll transfer to the scenic Flam Line that will take us up to Myrdyl (one hour), and transfer to a different rail line there, the Bergen Railway for a ride back to Bergen (two hours). The whole trip with time for transfers was to be 11 hours, but it didn’t turn out that way.

The boat tour was amazing. After exiting the harbor, we were motoring past and through the islands along Norway’s coast with the Norwegian Sea – above the North Sea! The sky was full of dark clouds and a few burst open. The girls decided to stick it out on the open back deck for the sake of their photography, but I found a front row seat on the lower level, and happily snapped my photos from inside. 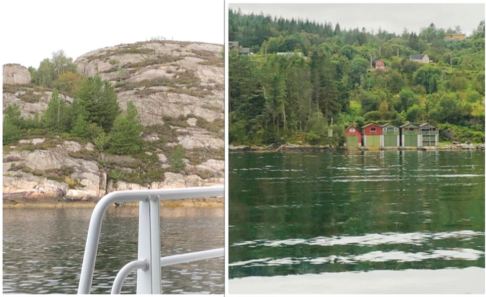 What struck me most about the islands is the variety. Some were barren of anything but a few low scrub bushes, others were bursting with evergreens right down to the shoreline, often right across the channel from each other. The shoreline along the mainland was full of tiered streets of houses with boat houses along the shore. The further we got from Bergen, the fewer the houses. 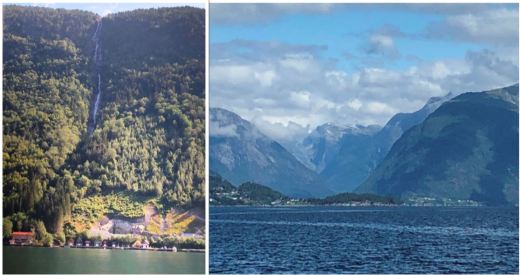 By the time we got to the opening of the Sognefjord, the sky had brightened so I spent more time on the deck. The shoreline cliffs along the fjord rose steeply, 3300 feet and more.

Occasionally there was enough flat land for a boat house or other small building. Some places were level enough to crowd in a few houses, maybe a hotel, and a dock, where the boat discharged and picked up a handful of passengers. At very few points we did see farming, but the practice seemed wrong, going up and down the hill, not along the contour.

While the scenery on the boat tour was reason enough to take it, our destination was Flam, a village with a tourist-focused railroad line that goes up to Myrdyl, a stop on the way to Oslo on the Bergen Railway.

The Flam Line was proposed as an extension of the Bergen Railway to serve the district of Sogn around Flam, with the first plans drawn up in 1893. Construction started in 1924 and ended in 1940. Bureaucracy boggled the mind back then too. 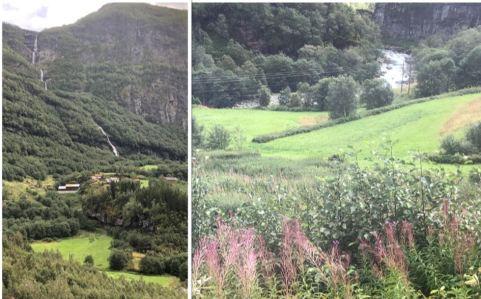 The Flam Line from Flam to Myrdyl is 12.6 miles, rises 2841 ft, has 20 tunnels, one bridge, and a large number of fantastic scenes including several spectacular waterfalls pouring into the river below us; we could also see hardy folk riding bikes and hiking along the river.

All of this is explained in three languages on the train speaker system. We even had a stop where we could get out for photos. This tiny spur is the third most-visited tourist attraction in Norway, and rightly so.

When we pulled into the Myrdyl Station, most people got off including us. We were all transferring to the Bergen Railway, going to Bergen from here. But something went wrong. The tiny station’s departure monitor stated that the train to Bergen was cancelled “due to problems with the electricity supply.” Now the station in Myrdyl is not staffed except for the café people, so there was no one to help us rebook a later train. And while the population of Myrdyl was about 100 when the railroad was being built, no one lives there now, so there are no overnight accommodations.

We all milled around, some people panicking, waiting for someone to help us. Finally an announcement: the Bergen Line was indeed closed until further notice. There was no estimated time for fixing the problem, so the only thing the Flam Railway people could do, is return us all to Flam and transport us by bus to Bergen, even though the problem was on the other railway. 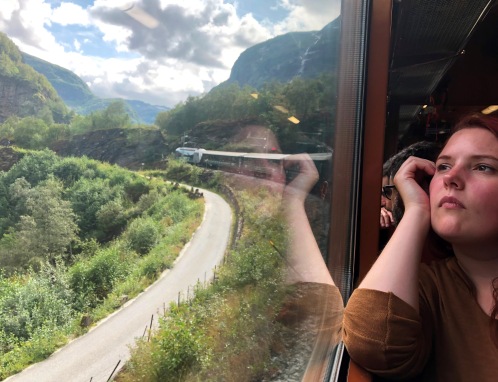 This made perfect sense; they couldn’t strand us up there. Yet we witnessed a mad dash to the train, everyone afraid of not getting seats. This was silly, as we were the same number of people who came up. On the way down, we heard the train speaker system giving us the same facts and pointing out the same stunning sites as on the one-hour trip up; a real two-for-one bargain. Upon reaching Flam, the train operators instructed us to reassemble in the parking lot to the left of the train platform.

And we did. But no announcements were forthcoming. Yellow-vested officials wandered through the crowd, answering questions, which were the same questions they heard every few feet. It would have been more efficient for someone to stand on a platform and address all of us at once. But no. Here’s the snippet of news we got: “Buses have been ordered from Voss, the nearest town, which is an hour away. They should be here in 10 minutes or so. The trip will take three hours to Bergen.” Given the short time-frame for the buses to arrive, people did not break ranks and go back to the Flam restaurants for food before the long trip back.

An hour later, the crowd was getting restless with no buses and no news. People dashed away to use the facilities, buy snacks, fruit, or water, and hurried right back. A bus finally did show up and some of the crowd rushed it. The yellow-vested officials pulled them back off the bus and replaced them with families with young children.

Forty-five minutes later the final two buses showed up, and everyone got a seat. Now we could settle in for the three-hour ride to Bergen. The remaining hiccup was that our driver had been driving all day and he could only take us to Voss. There we moved to another bus with a fresh driver. We finally arrived at the Bergen Bus Terminal after 11:30 pm, four+ hours after our anticipated timing. After walking home and showering, we’ll get to bed after midnight.

Now for a quick sleep, because we have a 7:57 am train to Oslo tomorrow morning, traveling the same rails through Myrdyl that we couldn’t get on earlier today. This train ride is considered one of the top 10 for scenery in the world. But after a day like today, I’ll have to push my appreciation for it. Travel is transforming, but one has to be prepared for hiccups, and adjust one’s attitude. The best part of this story is that Kay and Carly and I will continue to laugh about it over the years: a great travel story.

For other essays about my summer 2019 Europe trip see:

Living a lifetime in one place – Morgarraz Spain

Copenhagen in one day

I could live in Stockholm Sweden

Getting around Helsinki with sisu…or not

If you like this essay, please leave a comment. You may also enjoy my book, Manifesting Paradise, available on Amazon. Receive my posts automatically by filling in your email address in the “follow” box at the top of the right column.

I'm a writer and author. Check out my book, Manifesting Paradise on Amazon, and my blog, ManifestingParadise.com. I talk about Hawaii and the transformation tools I used to achieve my dreams.
View all posts by Diane Scheurell →
This entry was posted in enjoying other cultures, living full out, Make lemonade, Mother-daughter bonding, Positive Thinking/Choose Your Attitude, travel as a transformation tool and tagged Bergen Railway, Flam Railway, Myrdyl Norway, Positive thinking/choose my attitude, Sognefjord. Bookmark the permalink.