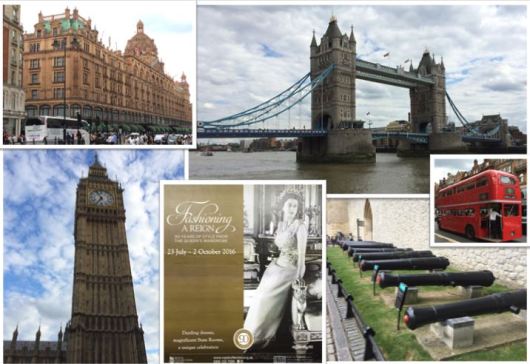 When traveling, I often get caught up in the main attractions, especially when with others. This trip to England is no different. My sister and I managed to see a prodigious amount in two full days in London before moving on: Buckingham Palace, the Tower of London including the Crown Jewels, Tower Bridge, London Bridge, Big Ben, Parliament, Harrods – a nice sampling. But I also enjoyed seeing everyday London through the eyes of my sister on her first trip here.

I’d been to England and Wales more than a dozen times between 1990 and 2008, for work. On the earlier trips, I dared to rent a car and drive from England to Wales and up near the border with Scotland. The last time, many years ago, a stone wall leapt out at me on a single lane road and took the mirror and trim off the driver’s side of the car. After that, the company hired drivers to take me around.

Since I retired and started traveling with my daughters, I’ve been content to take local transportation. I discovered on a 2014 trip that Underground Tube doors are not forgiving like subway doors in the US. I was used to doors popping back open if you stuck a leg in to get on. Not the Tube. The doors just clamp shut on you – or in this case, me. I was lucky that a man on the inside of the car wrestled the doors open a tad so that I could extract my thigh. The result: dirty pants, a large nasty bruise, and the resolve never to do that again.

The Tube is a great place to read clever advertising and study people and their dogs up close. Yes, leashed dogs are allowed on the Tube.

Some people on the Tube seem to be able to block out everyone else and do their own thing. I saw some Russian travelers having a very animated conversation about the burdens of capitalism. One of them in a lime green coat, nearly poked me from across the aisle with his gesturing. All the while he was rolling a cigarette in brown paper with a tobacco, ironically named, The American Spirit.

Lime green coats aside, for the most part, Londoners dress somberly, both men and women. My sister noticed it right away. Dark clothes abound, whether in March or July. In fact, you can usually tell a tourist by their colorful clothing. That includes visitors from all over the world, especially from countries once under British rule. Picture this: three beautiful older women in elegant saris, one pumpkin with hot pink trim, another a rust color with rich gold thread, and a third in brilliant blue and green, talking quietly in the Underground. I could not take my eyes off of them.

Everyday London is a mass of people all the time. Mentioned above, a great many are from all over the world. As with many large cities, people are insular, not particularly outgoing. But when asked a question, most bloom with politeness if not warmth.

The other thing I notice when I travel is washrooms. This is because I spent years of my working life doing product research on hand towels, toilet tissue and dispensers for public washrooms in the US and UK. I know a lot about bathroom practices. This is not often cocktail party conversation, so I’ll take this opportunity to share a bit.

People in England like their toilet paper to be thick by US standards. We saw lots of triple-ply in London. They’ve been dealing with low flow toilets longer than we have, and most toilets here have a choice in the amount of water that flushes. Which button to press is pretty intuitive. But if the water didn’t clean all the mess, you’ll find a toilet brush for you to clean it up, even in public washrooms! We must be tidy. And if you don’t understand the WC “rules,” some places post them. It doesn’t get more “everyday” than this. 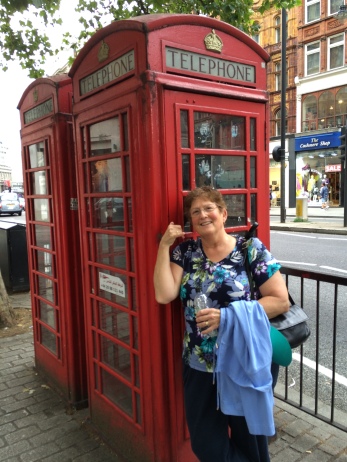 London has been fun. But I can’t wait to take my sister to the English coast. There, we will be in an apartment instead of a hotel. We can buy groceries, cook on English hobs, and do laundry with English washing machines. Experiencing everyday differences between cultures/countries is even better than visiting tourist sites from my perspective. I hope my sister agrees.

See other essays about this trip to England:

Fighting with the washer in Canterbury, UK

Back when street names meant something. Canterbury, UK

Punting on the River Stour in

Can a beachcomber ever be satiated ? Collecting at Lyme Regis, UK

I'm a writer and author. Check out my book, Manifesting Paradise on Amazon, and my blog, ManifestingParadise.com. I talk about Hawaii and the transformation tools I used to achieve my dreams.
View all posts by Diane Scheurell →
This entry was posted in living full out, Travel, Wisconsin family and tagged everyday London, travel as a transformation tool, visiting London. Bookmark the permalink.