Punting on the River Stour in Canterbury, UK

Posted on September 2, 2016 by Diane Scheurell

I finally took the historic punting tour on the River Stour, close to my last day in Canterbury. I don’t know why I procrastinated so long. Maybe I wanted the anticipation to linger. I’ve been seeing the Canterbury Punting Company’s boats on the river every day for two weeks. It looked like so much fun.

While waiting, one of the company’s people answered my questions about the fish in the river (chub, perch, brown trout, sea trout, pike and eel), the river’s depth (one foot here gradually increasing to 6 feet at the Abbot’s Mill), and this river site (because of its shallowness it was a fording spot for the Watling Roman road). 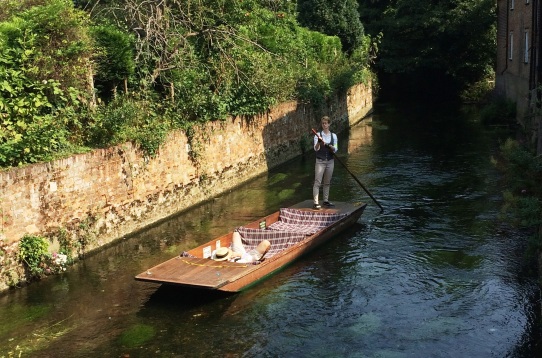 All of the punters I’d seen were males. So, as I and my traveling group waited on the bridge, I was pleasantly surprised to see our punter, Vilma, coming up the river with a single passenger, another employee.

Descending the concrete stairs to river level, we carefully stepped over one punt and across to ours. I was relieved to sit down on the blanket with a supportive pillow behind my back. My balance is not that good.

After giving us the safety talk and taking a picture for liability (required to prove who was on each trip; said they hadn’t lost anyone yet), we were off. 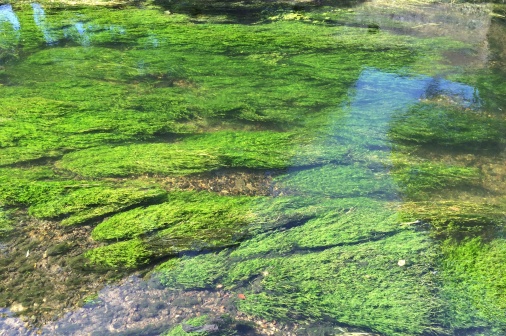 Vilma started with the basics. The River Stour breaks into two streams, creating an island (which includes Greyfriars Gardens) in the city centre. It further divides with a channel that the Romans built to control the water, and across which the Greyfriars Chapel now sits. Stour means angry, hardly a word you’d use to describe it today. It is one of the five cleanest rivers in England, though they don’t recommend drinking it. Vilma was very knowledgeable; the only time she couldn’t answer a question was about the water plants in the river.

I loved seeing this river from the punt, enjoying sites I’d come to love in the city from an entirely different perspective, and peeking around buildings to view things I hadn’t yet seen. This included the refectory (right, now the art gallery for Kings School) and guesthouse (left) of the Blackfriars, so called because they could afford the most expensively dyed robes of black, versus the poor Greyfriars, who wore the cheapest grey cloth. The Blackfriars (Dominicans of Inquisition fame) came here from Spain in 1221, three years before the Greyfriars.

Just downstream from the High Street bridge, was a medieval ducking stool replica, a punishment for minor crimes and nagging wives. Yes, a man could pay to have his wife ducked in the river – not a pleasant experience, as most industries with their effluent sat along the river and the city sewage floated there, too. Unlike today, where properties with river frontage are upscale, the river of old was nasty. 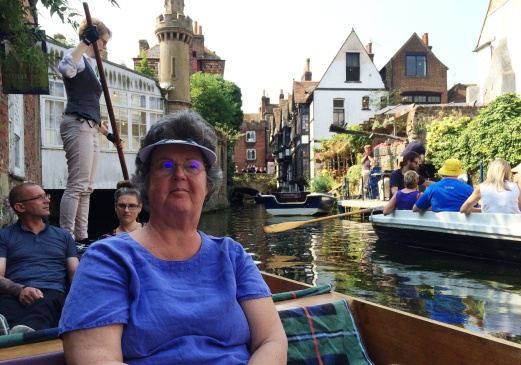 Vilma was a skilled punter, stooping to avoid hitting the bridges and buildings we went under, and taking defensive moves to prevent bumping with boats from another cruising company who rowed instead of punted and therefore faced backwards. 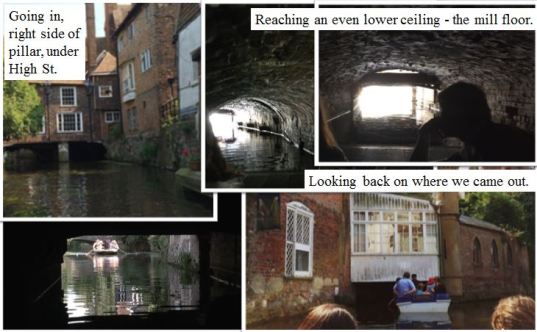 She snaked us under the low Eastbridge Hospital building on High Street, and on the other side, the King’s Mill. King Stephen leased it to the Abbot of St. Augustine Abbey in 1144. It continued grinding corn until 1796 when the owner, Alderman James Simmons, who also owned Abbots Mill, turned it into his residence. (Presumably the river was cleaner by this time.) Immediately behind the mill, Simmons built a warehouse with floor hatches over the river. They’re still here. He used them to lower cargo onto river barges, and then floated the goods to their destination.

At the Abbots Mill we had to turn around, because historic sluice gates prevented further travel downriver. I was here on my first day in Canterbury. A grain mill had been on this spot for centuries, taking its name the first owner, the Abbot of St. Augustine’s Abbey. It was purchased by another Abbot during the reign of King Stephen and became Crown property at the time of King Henry VIII’s reformation. In 1792, Mr. Simmons built a magnificently large mill on the site complete with an observatory on top, the second tallest building in the city after the Cathedral.

From the river, it was easy to see the two arches with water running under them. These were the mill races leading to the water wheels. Each wheel had a 16 ft diameter; and the water hit them halfway up the wheel (breastshot). The wheels drove eight pairs of millstones in the six story mill, which could grind corn into 500 quarters of flour each week. A “quarter “ weighed between 480 and 504 pounds in 1815 when the Corn Laws went into effect. The mill burned down in 1933. Vilma also pointed out the Miller’s Pub across the street, built in 1826 to serve local mill workers. The life of workers at that time was fairly insular; people lived and ate near their work. (For a fascinating peek into the life of an Abbot Mill worker, see these writings of a worker from 1930-1933.) 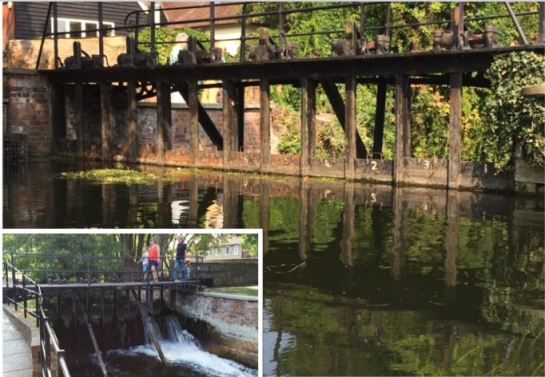 Then she showed us the twelve black sluice gates built in 1829 that still dampen the flow of the river. City personnel can raise and lower these twelve upper, and six lower gates, individually for flood control. 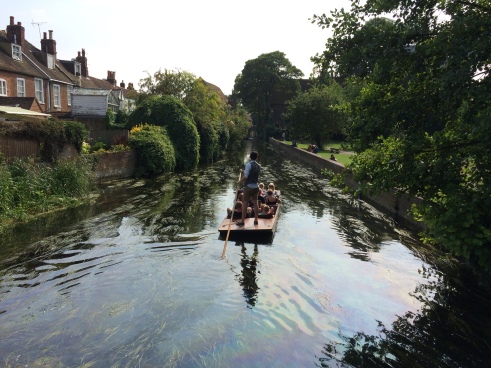 As we slipped past the Abbots Mill Garden on the right during the ride back up river, Vilma told us that this orchard was originally owned by the Blackfriars. They used the fruit to brew ciders and wines. Today the garden still contains fruit trees that are free for the picking when ripe, apparently popular with local students.

Vilma continued to bring history alive for us. One building, currently housing a pizza restaurant, was a brothel. To protect the reputations of the gentlemen visitors, two doorways led directly from the river, where they could enter discreetly by boat.

The historic Weavers House goes back to the days when French-speaking Belgian Walloon, and later French Huguenots, fled persecution on the continent. As protestants, King Charles II offered them refuge (1681) and they settled in Canterbury and other places. They were worsted weavers, and, in the second wave of refugees, some of the finest silk weavers in England. This helped the city which had seen a decline in the pilgrim tourist trade after Henry VIII shut down the churches, unsainted Thomas Beckett, tore down his shrine within the Cathedral, and burned his bones. The silk trade boosted the Canterbury economy once more. This house was built in the 14th century, despite the sign that proclaims 1500AD. The weavers took possession in the 1600s, installing their looms.

On the last stretch of the cruise, Vilma’s punt was narrow enough to go a short distance down the canal that the Romans built alongside what is now, Greyfriars Gardens. Here we paused, and I listened to her description of the Greyfriars. I knew it well, having crossed the footbridge often at the spot where she lingered, catching pieces of the stories with which the punters and rowers entertained their charges.

I had come to think of these people as familiar parts of my secret garden, watching the delight of their passengers enjoying the trip’s serenity and calming pace, while learning history.

I was sorry the trip had to end. 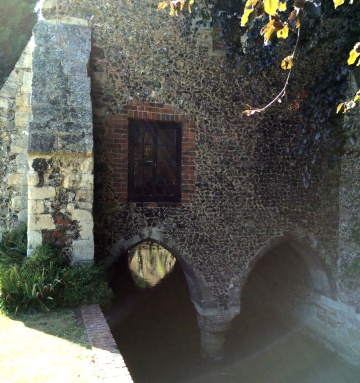 For other essays from this trip to England see:

Fighting with the washer in Canterbury, UK

Back when street names meant something. Canterbury, UK

Can a beachcomber ever be satiated ? Collecting at Lyme Regis, UK

I'm a writer and author. Check out my book, Manifesting Paradise on Amazon, and my blog, ManifestingParadise.com. I talk about Hawaii and the transformation tools I used to achieve my dreams.
View all posts by Diane Scheurell →
This entry was posted in Travel, Travel make me learn and tagged Canterbury Punting Company, historic river tour, Stour River, traveling is the easiest way to learn history. Bookmark the permalink.

6 Responses to Punting on the River Stour in Canterbury, UK