Getting around Helsinki with sisu…or not

August 2019. Wow, we thought Stockholm was cool (no pun intended). But Helsinki far exceeded our expectations. Everyone was so friendly. I guess they aren’t jaded by an overwhelming number of tourists like some of the other cities we visited. And although the Finns are known for not saying much, everyone we approached was very helpful.

And shopping was delightful. Helsinki is full of second-hand stores, our favorite shopping experience. Near our flat, we found eight thrift stores within four blocks. Summer sales were in full swing at all the regular stores. And they all had good stuff, though given the climate, the goods leaned toward woolens, leathers, and even furs, including hand-muffs! Helsinki people show excellent taste, sometimes funky, sometimes cat-walk gorgeous. Okay, take that with a grain of salt; anything beyond Croc sandals is dressed up for me.

The city itself has a turn-of-the-(last)-century glamorous feel with the highest number of Art Nouveau buildings in Europe, more than 600.

The Helsinki train station is a great example. It received a second-place BBC award for most beautiful train stations, beaten only by New York’s Central Station. Built in 1914, it serves 200,000 people every day. And Helsinki has a surprising number of trees along streets and in parks filled with people enjoying the summer hours. This is the furthest north we are traveling, and dusk arrived at 10:30 pm.

We learned about the Finnish trait of grit (sisu), the attribute that gives them resolve, patience, hardiness, resilience, and gets them through the long winter. At the same time, they have the highest score on the European Happiness Index. (That had to be measured in summer when they describe themselves as manic with 22 hours of daylight.)

We learned much of this, including sisu, on the Hop-On Hop-Off bus that passes through Helsinki. We had to exhibit sisu to get around. Our first day, we shopped, but my legs ached and I went back to the flat early. Kay talked Carly into renting one of the ubiquitous scooters after shopping another two hours. She had been enticing me since London, but my response was always “Hell No!”

Carly was a more compliant victim and both of them maneuvered onto one scooter. In short, within two minutes, they crashed the scooter at high speed going down a steep hill, and abraded many layers of skin (knees and elbows), on very rough pavement. They parked the scooter which remained pristine, and hobbled home sporting blood. Our flat was on the third floor, 52 steps. We weren’t sure they would be able to walk much the next day.

So we planned to take the tourist bus. But we didn’t know that 1) some stops (the nearest to our flat) were eliminated for road construction; and 2) there are two Hop-on Hop-off bus services that look very much the same, but take slightly different routes. We found ourselves waiting at closed stops and hobbling after buses to the next stop only to lose them turning corners. We finally gave up after about three hours of limping, wandering, and window-shopping. 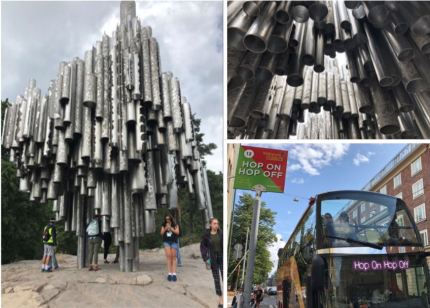 Frustrated, we finally found a taxi to take us to the Sibelius Monument, celebrating Finland’s greatest composer,  Jean Sibelius (1865-1957). It was fairly far out from the city center. When finished, we couldn’t find a taxi back, so we searched again for the Hop-on Hop-off stop. Found it! Waited about 15 minutes and the bus rolled right past us. WTH?! Then we spotted that bus stopping, about a block further on. We shuffled over, knowing we’d wait about 20 minutes for the next one. Then a bus from the first service rolled past, but of course did not stop. We were near tears with laughing and crying when our bus finally arrived and stopped. Now we could enjoy the rest of the route in leisure and also get closer to our flat when we disembarked. 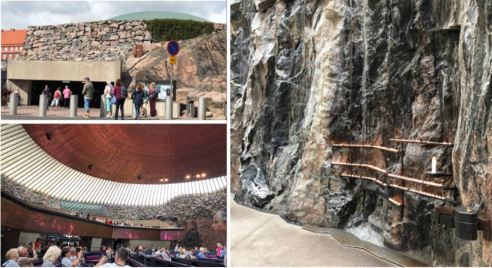 Next day, we took the tourist bus again. I got off at the Rock Church (unassuming outside with skylight strips, gleaming copper ceiling, and roughhewn walls inside), while the thrill seekers, Kay and Carly, stopped at the Linnanmaki Amusement Park (free entrance and no lines!). We gathered again at the flat, with one thing left to do in Helsinki: enjoy a public sauna, the ultimate Finnish experience. The plan was to hail a taxi there and back, but none drove past and we walked the whole way to Loyly, open until 10 pm.

This was a co-ed swimsuit-required sauna, though other types were available. We checked-in and received two towels, one for sitting and one for drying. We showered, found the sauna, carefully placed the sitting towel, and steamed until I couldn’t take it anymore. Then I was expecting a hot-tub to sooth my aching legs. But no. What they offered was a dip in the Baltic Sea, just outside the building. Despite the chill that comes with evening and a breeze, lots of Finns were doing just that, or at least sat outside in towels with drinks. Typically one goes from the sauna to the sea several times in an evening. Even my thrill-seekers declined this delight.

What I did find was a real fire, and a chance to get into my serene space. I wondered what drew Finns to a sauna as a regular thing. When I saw different groups engaging in talk, laughter, and libations, I realized this was the equivalent of going out for drinks after work in the US, only healthier. Loyly even had a restaurant attached.

After another shower, we braced ourselves (sisu) to find a taxi home. Nope. We did attempt to board a bus, but they wouldn’t take a credit card and none of us had cash Euros. So we resolutely backed off the bus, and continued our walk all the way to the restaurant for a very late supper.

The next morning we needed a taxi for the airport to fly to Bergen Norway. Kay Googled taxis but not one company had a booking process shorter than 3 hours. It was 6:30 am and the earliest available taxi pick-up was 9:30. Our flight was at 10:30 with a 30 minute ride to the airport. We were not about to miss our flight again. So, this time burdened with all of our luggage, we hobbled out to find a taxi. Score! Within three blocks!! Yeah!!!

For other essays about my summer 2019 Europe trip see:

Living a lifetime in one place – Morgarraz Spain

Copenhagen in one day

I could live in Stockholm Sweden

Bergen – a short but delicious visit

Bergen – Sognefjord boat and Flam Railway trip with a hiccup

If you like this essay, please leave a comment. You may also enjoy my book, Manifesting Paradise, available on Amazon. Receive my posts automatically by filling in your email address in the “follow” box at the top of the right column.

I'm a writer and author. Check out my book, Manifesting Paradise on Amazon, and my blog, ManifestingParadise.com. I talk about Hawaii and the transformation tools I used to achieve my dreams.
View all posts by Diane Scheurell →
This entry was posted in enjoying other cultures, learnng new things, Serenity rituals, thifting - thrift stores, travel as a transformation tool and tagged Art Nouveau buildings, Finnish trait call sisu, Helsinki Finland, Helsinki Train Station - Art Nouveau, Loyly Sauna in Helsinki. Bookmark the permalink.

4 Responses to Getting around Helsinki with sisu…or not