Family Traditions – 63 years at the lake near Boulder Junction WI 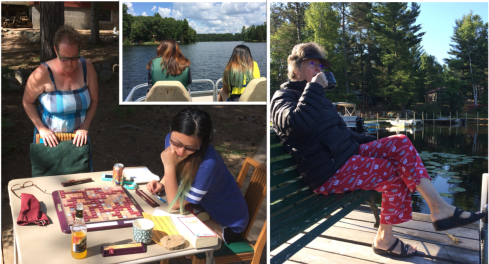 This year is the 63rd family reunion we’ve had at Fishtrap Lake. Not much changes over time up here. We still sit on the dock with our morning coffee, ride around the lake on my brother-in-law’s pontoon, and play Scrabble day and night. But it never gets old. Enjoy this essay about the early days Up North, reprinted from my book, Manifesting Paradise, published in 2014: 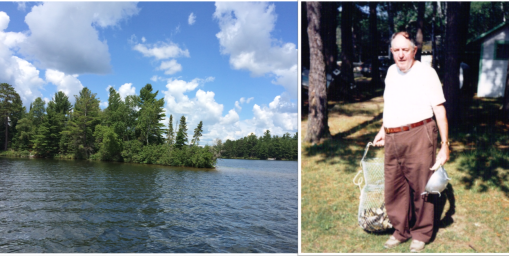 Steve’s Point, the section of Fishtrap Lake where Grandpa Steve used to fish. Dad heading to the fish-house to clean his catch.

Our strongest family tradition is the annual trip to Boulder Junction, Wisconsin, 12 miles from the Upper Peninsula of Michigan. My family’s been going to the same bay on the same lake every year since I was two years old. The trip’s original pull was the good fishing that Dad and Grandpa enjoyed and the cooler weather Up North in summer. But, over time, it became the fun and importance of strengthening family ties and teaching Scheurell values to the next generation. We older Scheurells also feel a nostalgic tug for a simpler time, probably the same reason my new life in Honoka‘a had such a draw for me. 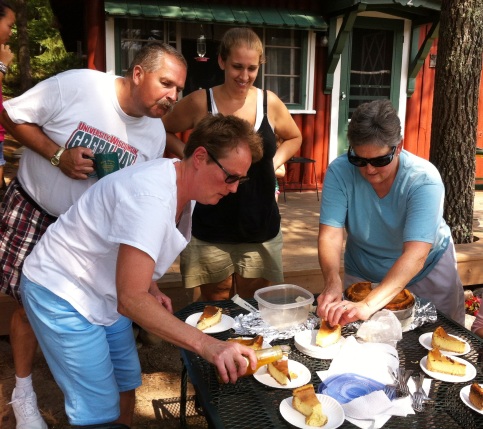 Now, living so far away from family, it’s even more important for me to honor this tradition. And there’s no better time to visit with family than the week when everyone’s on vacation. So the girls and I will travel this month. My husband hasn’t joined us Up North in many years. His idea of a good time is reliable electricity and plumbing, which are not always available. Blustery summer storms sometimes take out the power, shutting off both. 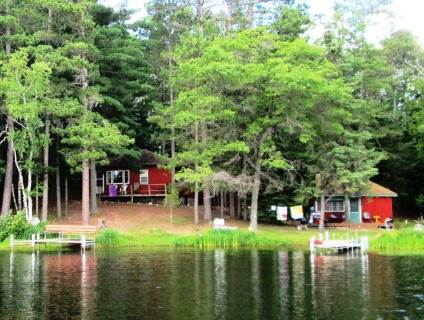 The trip highlight is the week with my sisters and their families, each of us at a different cottage. We can escape to our own places when we feel the need, yet be together at a moment’s notice. In the old days before cell phones, I’d send a kid down the hill in the morning to see if my sister was awake, or up to the fish-cleaning shack to tell my brother-in-law that supper was ready. While the kids are happier to phone instead of run, the charm is slipping away. Still, there was the time three years ago when the pontoon boat had engine trouble and three of us were stranded in the middle of the lake. My sister was able to call her kids to come rescue us.

It used to be my grandparents, parents, aunts, uncles and cousins who invaded the resort every year on the same week. I remember our family of five plus Grandma and Grandpa piling into Dad’s big aqua Mercury at 3 a.m. on the day of the trip. That car had a trunk as big as Baltimore, plenty of room for suitcases. But the Merc could also drag Dad’s trailer carrying a modest aluminum boat that served as a second trunk, stowing boxes of food, a heavy metal chest with its ice block and frozen meats, plus towels, games, box fans, lifejackets and various fishing accoutrements including the motor. In fact, the boat’s primary purpose may have been its storage capacity in transit.

We always grumbled about leaving early, but I realize now that it wasn’t just that Dad wanted to avoid heavy traffic in the big metropolis of Green Bay. No, he wanted to drive in the cool of predawn because cars didn’t have AC back then. The road song lulled us back to sleep so that he didn’t have to listen to us bicker (“Quit looking at me! Move over!”). The longer we girls slept, the easier the six-hour trip was for all of us. 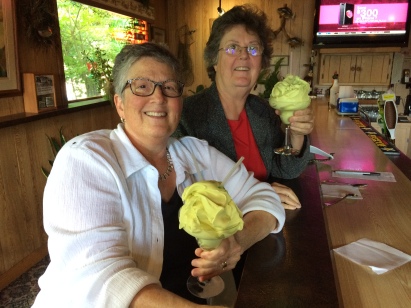 Once there, we cousins ran wild, though we were always within sight of someone who’d discipline us. It was grand: swimming, digging in the sand, playing croquet and beanbags, and taking the occasional trip into town for ice cream, and when we were older, grasshoppers. (My sister and I still indulge – five scoops of ice cream in each “drink.”) Dad was a safety nut, so we’d have to wait a full hour after eating before we could venture into the lake. His swimming rules were a production. First the anxious wait: “Is it time yet? How about now? Can we go now?” Then we’d hurriedly put on our swimsuits, grab towels and a salt shaker to remove any bloodsuckers that might attach and run to the lake – with an adult. Sunscreen wasn’t on the radar yet. 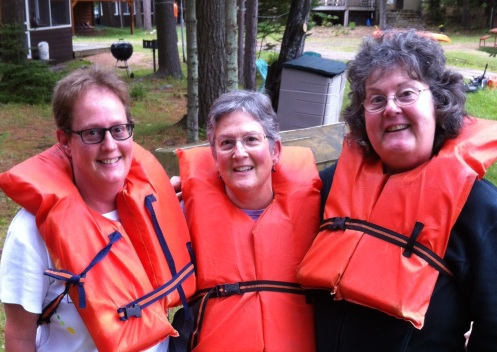 My sisters and I find some modern orange boobies and try them on for size.

Finally, we had to strap into the big orange boobies, the lifejackets of the day. Stored in our boat down at the dock, they always felt damp and cold from the last swim and, they always smelled faintly of fish. As we grew older, we realized they were quite the fashion statement. How we loathed them! But no life jacket, no swimming, even though we had adult supervision and we only played in shallow water. That was Dad’s rule, so we dutifully strapped in.

The week’s highlight was always the trip to the dump at night to watch the bears eat. We’d change into PJs, pile into the Merc and drive to the dump right around dusk. (But no snacks; they might draw bears to our car!) We and other vacationers surrounded the active part of the dump, turned off lights and waited. When the bears ambled up to feast, some people put headlights on so we could see them more easily. The bears were pretty nonchalant about the observers, digging into what could’ve been the remains of our lunch from the day before. The law doesn’t allow open dumps any longer, so my kids missed out on this tradition. 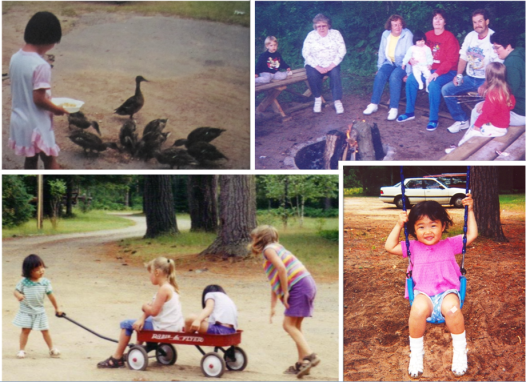 Now it’s my generation bringing our kids Up North. It’s a special place, all the more so because my girls led sheltered lives in Racine. They weren’t even allowed to walk or ride their bikes around the block without an adult along. (Holy cow! I sound like Dad!) But at the lake they played in the sand, fed the ducklings, explored the nearby woods, learned to pump on the swing-set, stayed up past bedtime at the bonfire and otherwise ran wild with their cousins. 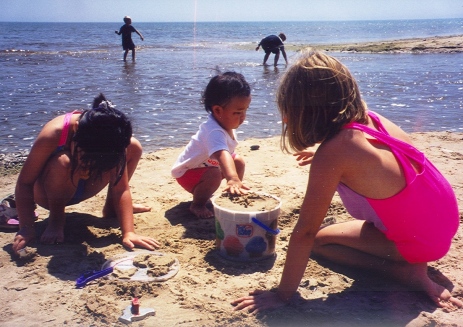 My second daughter was four years younger than her sister and cousins, who were, and still are, quite the cohort. When the little one came along, she pushed her way into the group. I never had to plead with them to take her along. Together they learned to catch toads and, years later, create hairdos and paint toenails. They used to propel around on my sister’s paddleboat and caught hell one time when she found them on it without lifejackets. That only happened once. When my sister chews you out, you don’t forget. 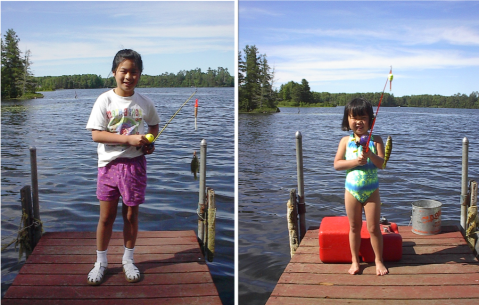 Their uncle taught them to fish, casting first off the dock, then from his boat, and even refurbished a rod and reel from Goodwill for my girls. I had their first catches – a miniscule perch and tiny bluegill – mounted at Al’s Taxidermy in Boulder Junction. Al looked at me as if I had two heads. “Ya know, I’ll have ta charge you da base setup fee on each a dose.” I was okay with that, $94 each, but he dropped the per-inch fee. We picked them up the following summer on the annual trip and they’re now swimming on the walls of our dining room. 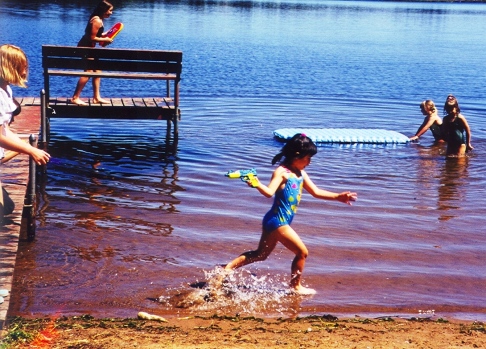 The girls didn’t fear playing in the lake, despite its tannin-stained water and the bloodsuckers lurking in the muck under the dock, as long as we remembered to bring the salt shaker along. For the last seven or eight years we also drove to Crystal Lake where the water is clear all the way out and there are no bloodsuckers. I told them that if they took Red Cross swimming classes through Level 6 (something I wanted), they could swim out to the rock pile at Crystal Lake without a lifejacket (something they wanted). That strategy worked splendidly and propelled them quickly through the swimming classes offered at home in Racine year after year. 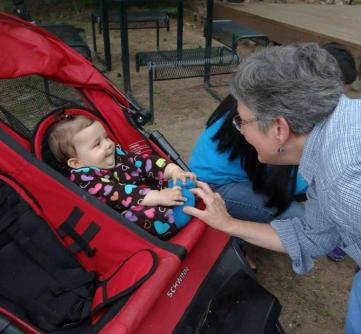 This is a special year. We welcome the first of the fifth generation, to Fishtrap Lake. My sister is all gaga about being a Nana. I’d be, too. Babies are magnets and this one is adorable. The girls can’t wait to play with her. She’s already a camera ham and has learned to crawl since I saw her in March. However, she’ll be in prime teething season. Thank you, Lord, for separate cottages. As my other sister used to say, “God made ‘em cute so you wouldn’t kill ‘em.” 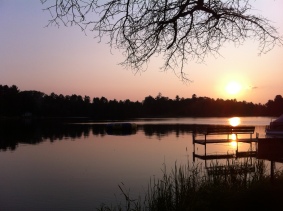 For other stories about our time at the lake, see:

My Father’s Ghost is here

We eat some strange stuff

Engaging my senses at the lake 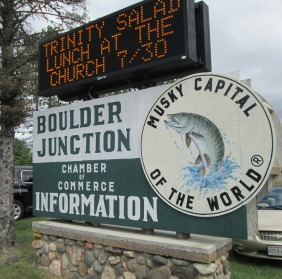 I'm a writer and author. Check out my book, Manifesting Paradise on Amazon, and my blog, ManifestingParadise.com. I talk about Hawaii and the transformation tools I used to achieve my dreams.
View all posts by Diane Scheurell →
This entry was posted in Being present, excerpt from my book, Honoring tradition, links to my past, Wisconsin family, Wisconsin roots and tagged Boulder Junction - WI, family reunions, Fishtrap Lake in Vilas County Wisconsin, honoring family traditions. Bookmark the permalink.