Remembering the recently dead with dancing at the Hongwanji Buddhist Temple 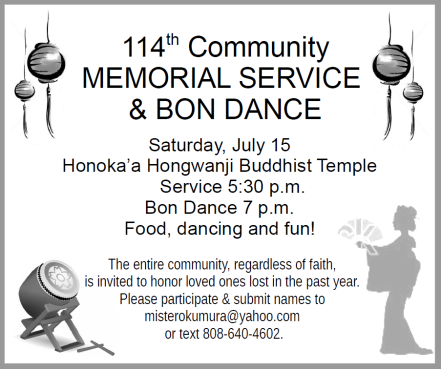 I am friends with several of the congregation at the Honoka‘a Hongwanji Buddhist Temple, mostly through the Mindfulness Meditation that they offer every Sunday afternoon. Last week I received my yearly invitation to join them in their Community Memorial Service and Bon Dance, their 114th! It’s a ceremony to honor the memory of community members who passed away in the prior year. Anyone of any faith is encouraged to attend and remember/honor loved ones who died in the last twelve months. Looking at the flier, it’s clear that this community celebrates death very differently from the faith of my family.

I’ve always felt welcome to join this historically Japanese community, originating in Hawaiʻi’s plantation era. They observe a unique meld of Buddhism, Japanese culture brought with them (mostly 1885-1894), and adaptations to island life. The Honokaʻa Hongwanji originated in 1904. My favorite celebration is bringing in the New Year (see Fireworks versus Meditation: setting intentions for the New Year). But I’ve never attended this one, because I hadn’t known any of the people who passed.

Thanks to Evan Bordessa for permission to reprint this photo

This year is different. One member of our Mindfulness Meditation group, Steve Way, died in spring. He was a wisecracking, cranky, funny, sweet man, who spoke profoundly about Buddhism and mindfulness.

His death affected the group deeply, and we discussed Steve, death, and the Buddhist vision of death for several weeks. It helped bring the group closer together. And because we wished we had known him better, his death even spurred us to spend time revealing something of ourselves to the others as a way to honor him; we wanted to say we knew each other on a personal level.

So I will be attending the Community Memorial Service this Saturday, honoring Steve’s passing.

They hold it in the Honoka‘a Hongwanji Buddhist Temple Social Hall. The announcement says, “a simple and healing ceremony…the service not only pays tribute to the departed, but expresses gratitude to them and all ancestors in an uplifting way.” As they read out the names of those who died, families and friends step forward to burn incense as a sign of appreciation for their lives. 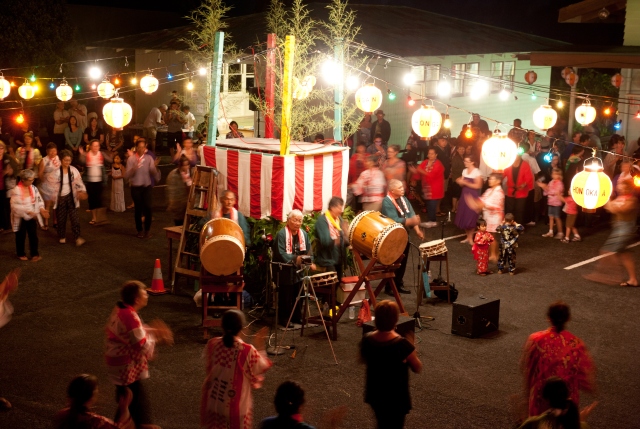 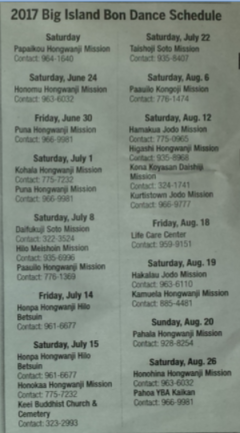 After the service, everyone will enjoy music, food and bon dancing, a traditional Buddhist style of folk dancing. Taiko drums accompany the bon dance, led by dance groups from different temples. Everyone is welcome to participate, from beginners to lifelong dancers. Bon dances are held at more than 20 temples on the Big Island every summer. Somewhere between 400 and 500 people usually attend the Honokaʻa bon dance.

The Memorial Service is only one example of the importance of the Temple for this community. Some organizations/institutions noticeably serve the broader good in a town. In Honokaʻa, we have our Honokaʻa People’s Theatre, our Hamakua Harvest, our Hamakua Youth Foundation. All have found ways to bring the community together. The Honokaʻa Hongwanji Buddhist Temple stands among them.

They open their services to all. They have a thrift shop in the basement of the Social Hall, serving the needs of the less fortunate among us. They open their Social Hall and Dojo to Anita’s yoga class, martial arts classes, a hālau hula, and community events like summer magic shows and magic camps for the keiki. Activities open to the public at no charge include weekly Mindfulness Meditation, bon dance lessons and practice, and a taiko drum class for all ages. 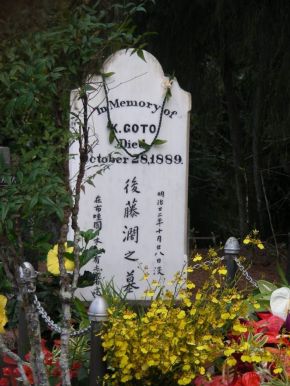 The temple’s Peace Committee produces the most elaborate event of the year in September, the annual Parade and Festival for the United Nation’s International Day of Peace. The festival is often scheduled for ten days, including activities such as Peace Movie Night, Wine at Five kickoff parties, a Day of Mindfulness, a Peace Poster Contest for the keiki, readings at the library, and music concerts. The whole community gets involved. The Committee is also producing a documentary film on the life and death of Big Island labor martyr Katsu Goto, who was lynched in Honokaʻa 1889.

The Honokaʻa Hongwanji Buddhist Women’s Association makes a donation every year for a local project. Recently, they donated to the Honokaʻa Methodist Church’s Sew Fun project, which teaches girls and teens, how to sew; it funded 21 sewing machines for the Wednesday afternoon classes.

Honoka’a Hongwanji Buddhist Temple stalwarts erecting the tower for the bon dance, including members of the New Dharma Band.

In short, the Hongwanji Buddhist Temple makes a point of connecting with the broader community, participating fully, and helping to create an inclusionary feeling here. I am so grateful for their influence in Honokaʻa. I hope you are blessed with similar exemplars in your town. 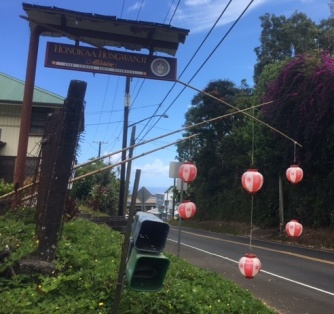 (For the Memorial Service on July 15, names may be submitted in advance by email to Miles Okumura at misterokumura@yahoo.com, or text 808-640-4602. During the Memorial Service, when the person’s name is called, anyone may step forward with friends and family to offer a small amount of incense (provided), with aloha. Participants do not have to be a temple member or a Buddhist to participate, and even without advance arrangements, anyone can honor loved ones by submitting a name just prior to the beginning of the ceremony. Admission is free.)

Prior essays on the Honokaʻa People’s Theatre include:

Saving the heart of our town: Honokaa People’s Theatre

Prior essays on Hāmākua Harvest include:

Hāmākua Harvest – these are my farmers

Prior essay on Hāmākua Youth Foundation:

Prior essays on the Hongwanji Temple:

Fireworks versus meditation: setting intentions for the New Year