When our daughter was home from college for the holidays, we decided to do some island exploring just like when we were tourists. So we drove along the western Kohala coast, over the volcanic mountain that’s up the road from us, but on the dry side. On a map, you’ll see this called the Kohala Mountains. Each of our other four mountains on the Big Island is just called by the name of its volcano. But the oldest volcano lost its peak long ago when a good chunk of its eastern side slumped into the ocean. That left a “mountain range,” and a little hook of land at the top of the Big Island. 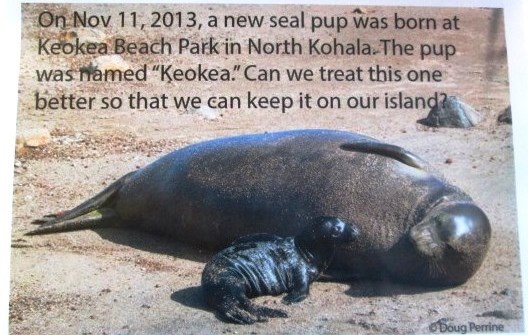 Near the end of the drive at the top of the hook past Hawi , the highway is really no more than a winding country road with the occasional single lane bridge. Here we found Keokea Beach Park, recently remodeled to include a viewing stand. A crowd gathered at the top and we ran up the stairs to see the source of the commotion. Turns out it was a Hawaiian Monk Seal mom and her baby. 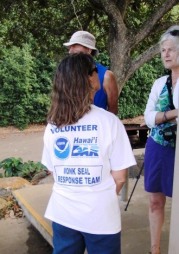 A team of volunteers staffs this park to answer questions and protect the seals. From them and the educational material they shared we learned that the baby, born November 11, was now close to 200 pounds, up from 20 or so pounds at birth. Mom, just five years old, is down from her normal weight around 500 pounds to half her size from feeding the pup. She’s named Waimanu after the large valley on the east side of the mountain where she was born. She’s a first time mom, and the second youngest seal known to give birth. Her baby is Keokea.

On first glimpse, the seals were hardly discernable from the rocks around them. The volunteer pointed out the pup’s white belly, with the mom to his left. Neither stirred; it was nap time. We learned that mother seals stay with their pups for 6 to 8 weeks, then leave them to replenish their own weight. So Waimanu will leave Keokea very soon.

We decided to come back in a few days to check out their progress. On our second visit the following week, we found Waimanu was still with Baby Keokea. But this time we had the opportunity to see them closer-up, and it was evident just how big that baby was.

Mom was attempting to get him into the water, a long sheltered channel that led to the open ocean. She humped herself forward on the sand about a yard, then paused, turning around to look at him.  Keokea was satisfied to lie on his back for a while, but eventually he rolled over and lazily humped himself forward to reach her.

Then she moved another yard and waited until he joined her. This happened several times, until they both moved a 30 foot distance from where they had lain on the wet sand. She showed an admirable amount of patience.

As they neared the small lapping waves in the shallow channel, he took the lead. But once immersed, mom was the better swimmer. Within seconds, they disappeared under the water, swam the length of the channel and slipped out into the ocean. And then they were gone, at least for the moment. I hope they caught something tasty.

The endangered monk seal is native to Hawaii. Only about a thousand remain, mostly on the long string of uninhabited Northwest Hawaiian Islands. Wikipedia says that only about 150 live on the main islands. We left the park feeling privileged to see these seals, a real ‘National Geographic’ afternoon. This is my kind of tourist attraction.

I'm a writer and author. Check out my book, Manifesting Paradise on Amazon, and my blog, ManifestingParadise.com. I talk about Hawaii and the transformation tools I used to achieve my dreams.
View all posts by Diane Scheurell →
This entry was posted in Hawaii beaches, Hawaii plants and animals, mountain, North Kohala, volcano and tagged Hawaiian Monk Seals. Bookmark the permalink.