Posted on September 13, 2017 by Diane Scheurell 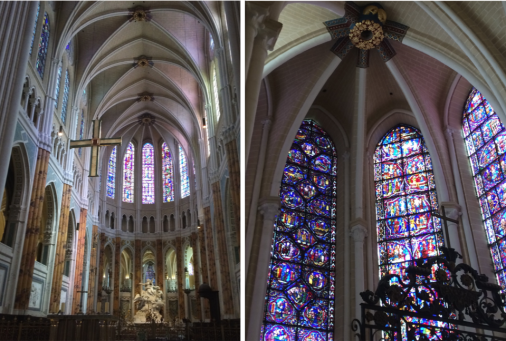 Chartres France is synonymous with its great Gothic cathedral built in 1194-1220. I was astonished to learn that this magnificent building is the new church, built upon the ruins of four other churches, the oldest from the 4th century. It must have taken much determination and skill to build such a glorious structure before power equipment was invented. 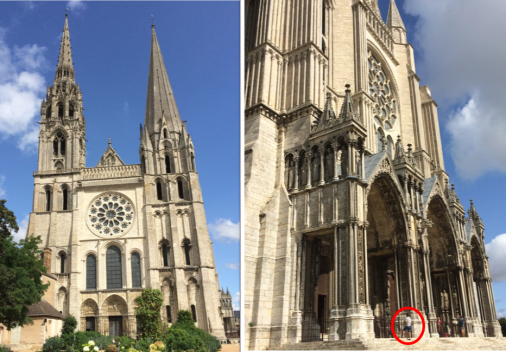 It’s difficult to explain the scale of this building, dwarfing those entering. Some of the windows are 24 feet tall. Inside, the nave soars 121 feet to the vaulted ceilings, taller than Notre Dame in Paris. Its towers are taller than Notre Dame too: 377 ft versus 266. But until you stand there, these are just words. 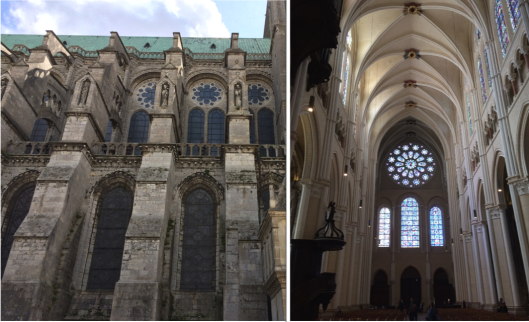 The Cathedral’s massive flying buttresses allowed larger windows, installed in 1205-40.  This church is all about the light that the windows bring in. It has the largest collection of medieval stained glass anywhere: 152 of the 176 windows are original. They tell the stories of the Old Testament, the New Testament, royalty, and ordinary people. 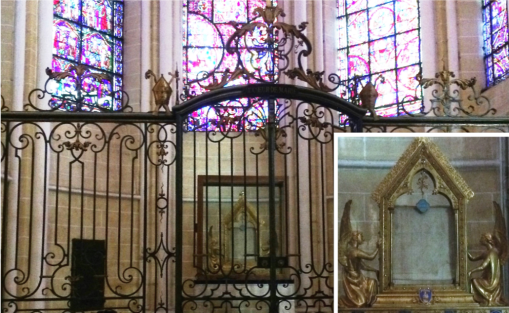 Pilgrims have come here since the 12th century to revere the Sancta Camisa, reported to be the tunic worn by Mary during the birth of Jesus, a gift to the Cathedral from Charles the Bald. According to expert analysis, the fabric was woven in Syria in the first century. I was astonished to see it on display in one of the chapels.

Pilgrims, including us, also walked the 42 ft diameter labyrinth, set into the floor stones in the nave. The labyrinth is covered with chairs most of the time, but they are moved on Fridays from Lent through All Saints’ Day to allow this ancient practice to continue. Many walking with us were barefoot. As I mindfully took each step, I prayed and meditated, fully conscious of the privilege to do so here. 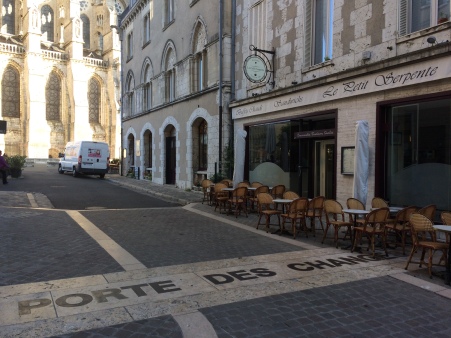 In the Middle Ages a cathedral was the center of town life, its economic hub. Here, textiles were sold on the north side, and meat, vegetables and fuel on the south. Money changers had their benches or banques, on the west. Wine was sold in the nave, and when that was thought inappropriate, the wine merchants moved to the crypt.

How the Cathedral survived intact through the ages is the story of several courageous individuals. During the French Revolution, the Revolutionary Committee planned to take the Cathedral down with explosives. Luckily, a local architect pointed out that the rubble would take years to remove, meanwhile clogging the streets. The committee listened. 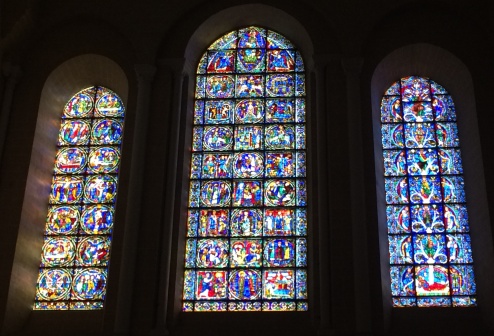 In 1939, all the stained glass was removed prior to the German invasion. The Allies planned to bomb the Cathedral, believing the Germans were using it as an observation post. But an American officer volunteered to investigate. He and one soldier infiltrated enemy lines and reported back that no German soldiers were stationed there. Military commanders withdrew the order to bomb it. After WWII ended, the medieval stained glass was cleaned and re-leaded before reinstallation. 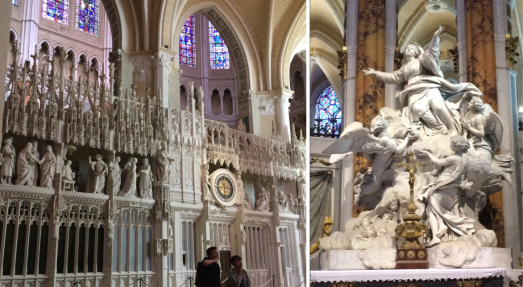 The Cathedral was only a block away from our flat so we stopped in several times a day. On Friday morning, I was examining some of the 200 statues in the wall around the choir. Suddenly, I heard a single beautiful voice inside the choir enclosure: ‘Kyrie eleison.’ A group responded: ‘Kyrie eleison.’ It was the old familiar Latin in the same melody I remember from my childhood. Automatically I sang with them, drawn toward the voices in the choir. This is the core of the church, an intimate space despite the massive statue of the Virgin’s Assumption at one end. 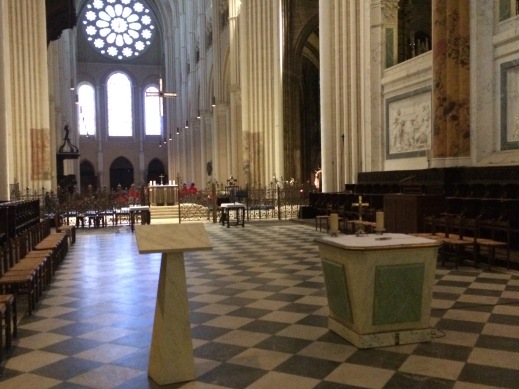 I could not understand the French sermon of the seated celebrant, but the soft gentle murmuring of his voice washed over me and soothed me. At the Offertory, he hobbled with a cane to the altar, hanging it from the side of the small white and green altar to free his hands. He and four other frail priests chanted the ancient words, all with their arms extended over the host. Again we sang in Latin, this time the Agnus Dei. The age-old Gregorian service gave me goosebumps. Only about 30 of us celebrated this mass.

That evening and the next, we also attended Vespers. Four women in white tunics walked solemnly to the nave, inviting people to join them. Vespers is not a service common to the Catholic community in the US, nor here either as it turns out. After the service, we talked with one of the women who was from Delaware. She’s been here a year and told us that this group is trying to bring Vespers back to the Cathedral. 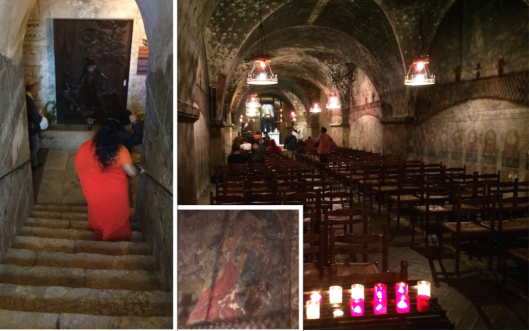 The next day we attended mass in the dark Cathedral crypt, a completely different experience. Descending the steps and finding the chapel, we walked past frescoes from the 12th century, surrounded by the walls of the even older church beneath the Cathedral. 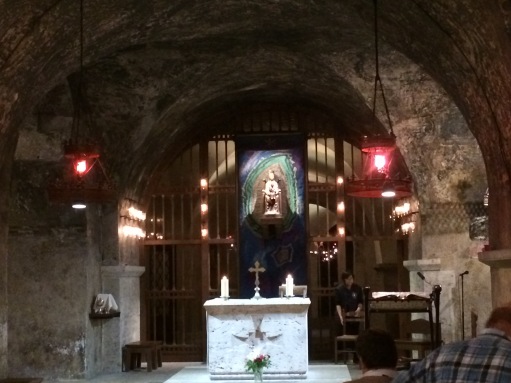 This service was completely in French, so we could not sing with the eclectic congregation, people from different parts of the world. Some knelt on the hard stone floor for much of the service. Others moved to the aisle to give themselves room to kneel and touch their heads to the floor at the moment of transubstantiation. A few knelt to receive the host. I wondered if it was just because they were at this holy site, or if they celebrated mass the same way in their own communities.

The whole Cathedral encounter is one I will not forget. It felt as if we were living there, going often, and seeing the ancient patterns of each day. I felt like a real pilgrim. What an inspirational way to end our adventure in France.

View from our kitchen window.

For other essays on our rural France journey, see: 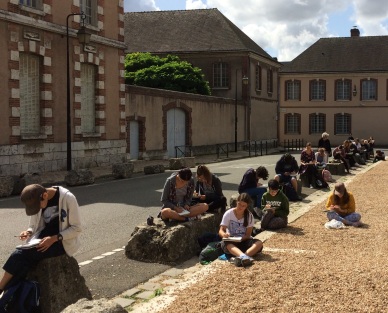 A class drawing the front of Chartres Cathedral.

San Malo – the rebels of Brittany

The megaliths of Carnac – Stonehenge on steroids 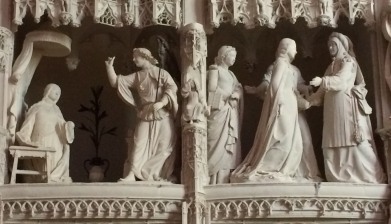 Saumur – living it up in a villa and houseboat

If you like my blog, please leave a comment. You may also enjoy my book, Manifesting Paradise, available on Amazon. Receive my posts automatically by filling in your email address in the “follow” box at the top of the right column.

I'm a writer and author. Check out my book, Manifesting Paradise on Amazon, and my blog, ManifestingParadise.com. I talk about Hawaii and the transformation tools I used to achieve my dreams.
View all posts by Diane Scheurell →
This entry was posted in enjoying other cultures, links to my past, Meditation, Prayer - Pule, travel as a transformation tool, travel in rural France and tagged Chartres Cathedral, Chartres Cathedral Labyrinth, Latin mass, Sancta Camisa, travel in rural France. Bookmark the permalink.