A day-trip to Tangiers, Morocco

I had no idea what to expect in Tangiers. I hadn’t planned to go there, and worse, I had done no research on it. At first, it was a lark to check another continent off our bucket list, the mysterious Africa. But it became so much more.

Our guide, Danny, described the day’s unfolding as we took the 1.5 hour bus trip to the Port of Tarifa from Marbella. Tangiers is roughly divided into three parts: the modern city, the medina which is the old city, and the Kasbah, the walled fort on top of the highest hill in the medina. We’d be visiting all three.

We had multiple checkpoints on both sides of the Strait of Gibraltar, four stamps on our passports by the end of the day, and several glass plated booths from which officials scrutinized us. But Danny made those transitions easy; he is well known at each point, because he makes this trip several times a week. If all the checkpoints hadn’t convinced us we were in a different country, that first view of Tangiers from the port made it clear. Street signs were in Arabic and French, the two official languages of Morocco, and a Minaret was even at the port.

Here we met our local guide, Abbey. He wore the traditional djellaba, but also wore a colorful pair of socks with his shoes, apparently his trademark. Both Danny and Abbey made us feel safe, even in the medina markets where pesky street vendors will not take no for an answer.

As a way to ease us into this radically new environment, we took a mini-bus to tour the rich region of the city, up in the hills. Malcolm Forbes owned a palatial estate up here, and many others who never wanted to be named. In ancient times, it was a strategic Berber town, holding the coveted African Gate of the Straight of Gibraltar. They were ruled by many foreign powers over the years, gaining independence in the 1950s. In 1923, foreign colonial powers gave it an international status. This city has been a place of intrigue, spies, shadow diplomacy and laundered money, for a long time.

Our first stop was a park where several locals had brought camels. Did we want to ride one? Are they kidding? Heck yes! You don’t appreciate how big these animals are until you need a two-step ladder to get on. Experiencing the camel getting up and down again were the scariest parts. Being led around for a walk was similar to riding a horse except no reins – only a stump-like thing on the saddle, and no stirrups; the feet just dangle.

We also had a photo-op with a baby camel. His wool was so soft, especially along the neck. The smell of the camels lingered a bit on our clothing, but who cares? This is Tangiers!

We continued our driving tour. Just before we arrived at the Kasbah, a funeral procession overtook our stopped bus. The compatriots of the dead man carried his sheet-wrapped body above their heads, chanting as they streamed past us. Stunned, we remained quiet for a few moments, each with our own thoughts. A few minutes later we arrived at the Bab Gate of the Kasbah, the walled fort on the hill, and the beginning of the walking tour. Abbey pointed out the characteristic Muslim shape of the gate, one of several into the Kasbah.

One enterprising person had set up an orange juice stand not too far inside the gate, and for a moment, it took me back home to kids’ Kool-Aid stands. But these drinks came from freshly squeezed oranges. The water likely came from a nearby fountain. Abbey told us that some people here did not have running water and had to use the public fountains for all their water needs. Some did not have electricity either.

Much of the Kasbah was a labyrinth of narrow passageways full of turns and steps. In the working-class neighborhoods, interesting doors and windows overlooked the passage. Colorful tiles covered steps into homes and even the underside of flower ledges, and the occasional tree added shade.

In the poorer neighborhoods, shade came from the narrowness of the passageway and overhanging second-floor units. In some cases, these second-floor walls from apartments across the alley were so close that they virtually touched. 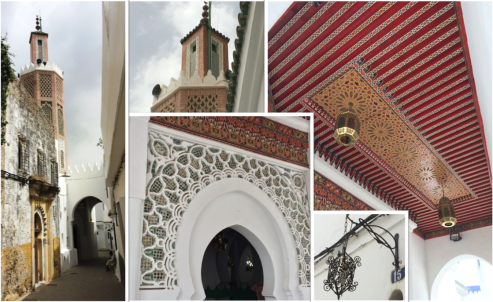 We were walking past a mosque just as the call to prayer, one of five every day, went out over the loudspeaker. While we could not enter the mosque, we could appreciate the beautiful tile work under the portico, especially the ceiling.

And then it was time to eat lunch just outside the Kasbah, on a restaurant terrace overlooking the city, beaches, the harbor and the Kasbah wall. Abbey urged us not to eat all the bread, because we had three full courses coming. But we could not help it.

The olive oil was the best I’ve ever had, which is saying a lot, given my last several weeks in Spain. The bread was freshly baked in a communal oven down the street. It came with a selection of local olives. The first course was a saffron-spiced soup – I ate every drop. The second course was shish-kebobs with salad and eggplant. I tried carrot juice as my drink and found it a perfect complement to the meal. The third course was spiced chicken and vegetables on couscous. Dessert was a pastry similar to baklava, and we finished it all off with mint tea. With the afternoon walk ahead of us, we were sure to burn off some of it.

Alcohol was not served at this restaurant, though it is available in other places, despite Islam being Morocco’s state religion. The Tangerians follow a more relaxed branch of Islam, and Muslims, Christians and Jews live peacefully together here. A Muslim man can still marry up to four wives there, but the first has to approve of the second and so on, and the man must prove that he can afford more than one wife.

Throughout lunch we listened to Moroccan music playing inside the restaurant. The musicians were not shy about requesting tips, even as we passed by them on our way to the restroom. Just before dessert, a snake handler showed up. Some of our group gathered around, appreciatively clapping and gasping every time he dropped the snake and it started to slither toward their feet. I was safely standing behind the musicians.

But then he put his poisonous snake back into the bag and took out another, presumably not poisonous, offering to drape it around our necks. I hate snakes, even worms. But something drew me to the opportunity. I’ve never even touched a snake, so why not now, here in Morocco? The snake felt heavy on my neck as he draped it around. My daughter snapped the picture and then I was gladly out of there.

Our afternoon walk through the medina was the most interesting of the whole tour. Building colors were brighter than elsewhere in shades of blues and oranges, sometimes with murals. One mural showed the community baking oven, another people wearing traditional Berber dress. (Berbers are over 95% of the Moroccan population, though Tangiers has a heavy European population and influence.) Potted plants added greens and ceramic tiles could be any color.

We walked briskly through covered and uncovered vegetable and fresh herb markets. Abbey admonished us to stay together and Danny brought up the rear. So many things were in season and the photographer in all of us bogged down our little procession. 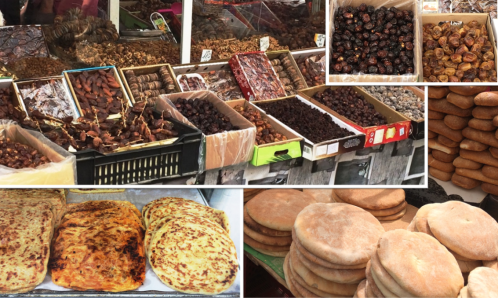 As we walked to the meat market, we saw a man walk in with a headless, gutted goat or young cow over his shoulders. Nearby were the breads and dates. The dates in the glass case must be special indeed.

But my favorite was the spice market. Dried spices, some ground, some whole, sat in open bags with pungent, fresh, tangy, green, peppery, even earthy aromas, some subtle, some powerful.

The other fascinating areas were the stands with olives. Having grown up in the Midwest, I knew very little about good olives, and still cannot consider myself educated. These appeared to be raw, uncured.

I was sad to leave the sensory stimulation of the food markets, but happily found an equally rich environment looking at silk yarns for embroidering and richly hued hand-tufted wool carpets. Perhaps next time I come, I can be persuaded to buy a magic carpet. They even make it easy by taking Euros and delivering “free,” even to Hawaiʻi.

For the rest of my Spanish adventure, see:

Free room and board in Spain for a week with Diverbo,

In love with rural Spain – the village of La Alberca 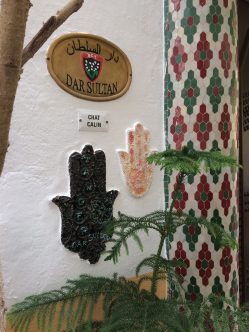 Tavern-hopping for tapas in Madrid

Lucking out with the perfect flat in Madrid, Spain

I'm a writer and author. Check out my book, Manifesting Paradise on Amazon, and my blog, ManifestingParadise.com. I talk about Hawaii and the transformation tools I used to achieve my dreams.
View all posts by Diane Scheurell →
This entry was posted in daughters, eating, enjoying other cultures, getting out of my comfort zone, learnng new things, Personal growth, travel as a transformation tool and tagged camel riding, Kasbah, medina, Moroccan food, Tangier Morocco. Bookmark the permalink.

11 Responses to A day-trip to Tangiers, Morocco