Makahiki – a new twist on an old tradition

We are coming into the Makahiki season, an ancient Hawaiian celebration of the harvest. Officially begun on the new moon after the Seven Sisters (the Pleiades) became visible on the horizon, it lasted four lunar months. The people celebrated because war and unnecessary work, including farming, were forbidden – kapu. It was the rainy season, and time for spiritual cleansing; time for the land and the people to rest. They honored Lono i Ka Makahiki (often shortened to Lono, the god of fertility, agriculture and rain), feasted and played competitive sports – the football and basketball season of their day. 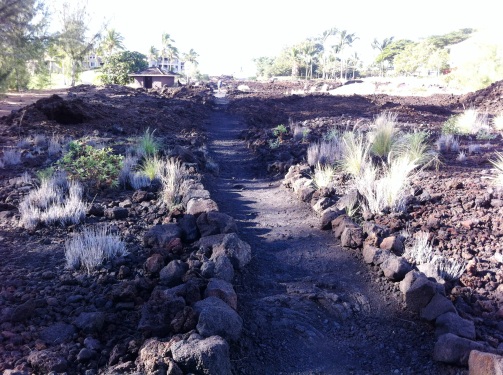 At this time, the chiefs surveyed their lands following the King’s Trail, bringing a staff carved with a depiction of Lono with them. At each ahupua‘a, or section of land, the people in that area would pay tribute to the chiefs and display all their goods, their best handiwork and crafts. The point was to show the chiefs and the gods what they had done with the land entrusted to them – what they had made of their opportunity. The chiefs’ role in this was to maintain the balance between the gods and the people.

Only one small island still holds the tradition of the Makahiki procession. When the islands lost their chiefs, there was no one left to carry out the duties, and the tradition fell away. Until now.

Of course, what immediately came to the minds of well-intentioned folks was, “You can apply for a grant!” He scoffed. “I don’t need money to pray. I don’t need money to walk my land.” And so began the grass-roots effort to create a new tradition, born from the seeds of the old.

Lanakila drew on the experiences he has had with the Hopi and Pitt River Native Americans in the southwest, both of whom have long traditions of long-distance running to honor their lands. Every year for the past 10 years, at least one Hawaiian, sometimes Lanakila, has run with the Pitt River Indians on their ancestral run from one sacred mountain to the other: 104 miles in two days. Taking the idea of a prayer run to his Kumu (teacher), she encouraged him to follow his heart. No one else was doing anything to revive the tradition, so he should go for it. “Just do things as pono (excellent/proper) as possible.”

The idea seemed exciting and daring to the group he gathered. “This prayer run is for all people of all traditions. We are making room for everyone.” Called Aha Pule ‘Aina Holo (a prayer moving throughout the land), it will be run clockwise around the island over four days, starting in Honoka‘a later this week. The emphasis will be healthy bodies, healthy families, healthy communities and healthy ‘āina (land).

Everyone is welcome to participate, to whatever extent they can. He suggested that little kids and kupuna could carry the staff depicting Lono in the towns along the route, while a group of long-distance runners will take it on the long stretches of highway. And then, he proudly revealed that 20 runners from the Pitt River Tribe have been holding garage sales and raffles to raise the money to fly here and join the run: men, women, families.

Someone asked about the tenor of the run – was it tied to the protests over the contentious TMT Telescope to be built on Mauna Kea? Lanakila was emphatic: “No. This is not a protest. It is a prayer.”

Word is spreading fast around the island and preparations are underway for a dinner ceremony with the Pitt River guests the night before the run. It is a pono potluck with Hawaiian foods (preferred) or locally grown, but at minimum, healthy. His hula class will dance and our Hawaiian Culture Class is invited to chant as part of the ceremony. We will wear our hula attire from the ho‘ike Monday night. The next morning, participants and volunteers will gather at 5 am in Honoka‘a Park for pule (prayers) and a light breakfast. The Aha Pule ‘Aina Holo starts promptly at sunrise.

Lanakila is a remarkable young man. He is calling people to action, and they are responding with enthusiasm. He is inspiring a whole new celebration across our island. And, no doubt, this prayer run will be successful. Success will be measured in the ability of this run to “lift the consciousness of all to heal and malama (care for/protect) our ‘āina, our lahui (people), and ourselves. It is to reconnect us to our kuleana (responsibility) to malama our kino (body/self) so we can malama our ‘ohana (family), our lahui and our ‘āina.”

It will happen; his name, Lanakila, means triumphant, victorious.

For more about the Aha Pule ‘Aina Holo see:

“On foot around the Big Island in four days – Aha Pule ‘Aina Holo.“

I'm a writer and author. Check out my book, Manifesting Paradise on Amazon, and my blog, ManifestingParadise.com. I talk about Hawaii and the transformation tools I used to achieve my dreams.
View all posts by Diane Scheurell →
This entry was posted in Holidays and festivals, Honoka'a, Honoring tradition, island culture, Lanakila Mangauil, Resurgence of Hawaiian Culture and tagged Aha Pule ‘Aina Holo, honoring Hawaiian culture, Lanakila Mangauil, Makahiki, Makahiki run. Bookmark the permalink.

9 Responses to Makahiki – a new twist on an old tradition