When I brought my treasures back from beachcombing last week, I got excited about creating a display or memory bowl. (See Beginner’s Beachcombing in Hawai‘i.) But I’ll need more memories.

So I returned to the shady beach. I had Dianne along this time who had been here before. I was anticipating what I might find on the beach, but first things first – we plunged into the water.

We ocean bobbed and talked. All sense of time left me as I took in the beauty of the water around me. That day it was glassy. I don’t mean still, as there are always swells coming in. But there were no white caps, just angular surges (very strange applying that word to water), that caught the light in different ways. Layers of these angles appeared in the water around us, shifting and changing colors from blue to green to gold as they intersected and moved in front of white rocks or black rocks below.

The splashing of playing kids only enhanced these transformations, altering the water’s color in small patches. It made for a soft watery quilt that changed as I studied it. I’m sure there’s physics behind this, but I prefer to think it’s God wrapping Her colorful watery comforter around me. As the position of the sun changed, and the wind picked up, we began to see little sparkles on the surges out further – Dianne called them diamonds on the water.

When we finally dragged ourselves out, I took off down the beach to find treasure, this time armed with a Ziploc© Quart Bag and my camera. Almost immediately, I found an opihi shell. The limpet is apparently good to eat, but has to be harvested off the wet rocks. This shell was empty.

My attention was on the sand and the interface where the small waves washed up. I’d done some research and now knew that the coral pieces I found last week were Cauliflower Coral.

They are one of four dominant corals in Hawaiian waters, and hardy to wave action. That’s why we find it near shorelines. Only the topmost cell layers are living. Early Hawaiians used it as an abrasive to file wood objects.

As I started to know these corals as animals, it encouraged me to respect them. I wondered if all the coral pieces on the beach were already dead. I guessed yes, as they’ve dried out in the air. But how long does it take for the cells to die? Clearly I’d only touched the surface of my research on this animal.

One of the stones to catch my eye was a piece of lava with white and pink stuff on it – something else to research. It looked like a thin layer of some sort of coral.

When I looked up from this stone, I noticed that many of the large lava formations out in the water had white patches at their interface with the sea. The waves washed against the white area occasionally. If this is coral, then it can obviously withstand periods of time out of the water at low tide.

A few yards further down the beach, I came across a section of lava that had been bumpy protrusions, later removed (snapped off by rocks coming in on the waves?). What I saw was a layer of the white stuff around what had been the base of each lava bump. More data, but more questions too.

The first question I asked was, why hadn’t I noticed this area of beach last week? For that matter, why was I seeing so many new things today, that I had never noticed on any beach before? Over the next hour, I observed my attention shifting from sand to vista, from micro environment to macro environment. That constant shifting inspired the questions I asked. 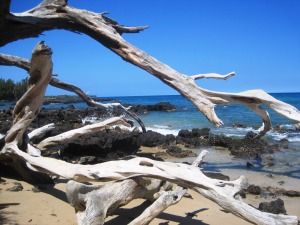 The notion jolted me back to a favorite quote my department loved back at work: “The real magic of discovery lies not in seeking new landscapes, but in having new eyes” – Marcel Proust. I was developing new eyes on this unfamiliar landscape of the beach.

The last section of this beach contained many twisted dead kiawe trees. Their bleached white bones contrasted so beautifully with the clear blue water. At times I had to carefully crawl over the trees to keep moving along the beach – it was that or walk out onto lava with bare feet in sections with no sand near shore. 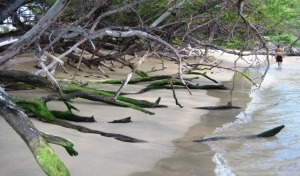 I wondered how the presence of the dead trees might be altering the micro environment on the beach. The trees right on the interface contained a coat of algae. Maybe that was providing a readily accessible food source for animals that would otherwise not survive a long trek across a barren beach – just a hypothesis. 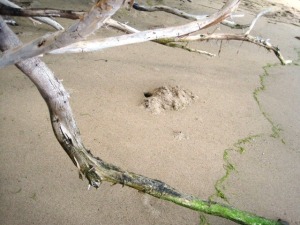 As I gazed at the tree skeletons, I kept seeing movement on the sand from my visual periphery. By the time I whipped my head around, the movement stopped. I suspected it might sand crabs, as I noticed many small dug-out holes in the sand, each with its accompanying pile of sand debris nearby. I had observed larger holes on Hapuna Beach last summer, many of them orange sized, but never saw a crab. This beach had more smaller holes. So if the crabs were out, they were small enough to overlook, except for the teasing movement at the edges of my vision.

Finally I caught sight of a fairly big one out on the sand, too far away from his hole to make a run for it. The crab was sand colored with browner dots – perfect camouflage!  He stood still, trying to blend in, but his shadow is what caught my eye. This one was not near the shade of the kiawe trees with their algae. He was big enough (2.5 inches across) that he probably didn’t need the shelter of the dead limbs or the algae they provided.

As all these thoughts swirled through my head, the crab finally made a bolt for the water. He ran extremely fast, and landed in a wave quicker than I could move my camera. The wave took him out to sea. I hope that’s a normal part of sand crab existence. 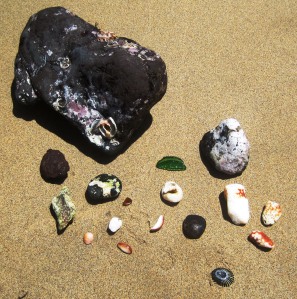 I was ready to head back to Dianne and our second leisurely swim. On the way I found a large lava rock with the white stuff, some pink stuff, and what looked like the edges of shells embedded in it. I think I’ll take this piece to Dr. Beachcomb for her wisdom on the matter.

I also found a piece of green glass, the bottom edge of a bottle. It no longer had any sharp edges, but it wasn’t sea glass yet. So after taking a picture of my finds, I threw it back into the ocean for someone else to discover after it developed that lovely frosted look.

Meanwhile, the sea swells continued to have that glassy angular look as we bobbed around again before leaving the beach. This summer, life’s a beach!

Also see I solemnly swear to enjoy the beach (#3 of 3 essays on HI beachcombing),  and Beachcombing with Dr. Beachcomb.

For tips on successful beachcombing, see Beachcombing “tools” to the rescue

I'm a writer and author. Check out my book, Manifesting Paradise on Amazon, and my blog, ManifestingParadise.com. I talk about Hawaii and the transformation tools I used to achieve my dreams.
View all posts by Diane Scheurell →
This entry was posted in beachcombing, Coral, Hawaii beaches, lava and tagged Hawaii beachcombing treasure, sand crabs, types of Big Island coral. Bookmark the permalink.