Last week I went to the Kilauea Volcano with Dianne and Mitch. I hadn’t been to the Hawai’i Volcanoes National Park since we were tourists visiting the island – maybe four years ago. At the moment, the local papers are full of the news that the volcano is on the move. The Halema’uma’u Crater within the Kilauea Caldera is filling with lava, now within 75 feet of the crater floor. So when Dianne emailed saying “Let’s go!” I said yes.

It’s about an hour to Hilo and another 30 minutes to the park. Our first stop was the Volcano House, the historic lodge within the park sitting on the rim of the Kilauea Caldera. I’ve stayed there, along with Mark Twain and a lot of other famous people over the years.

Recently it’s been closed for renovation, but we could walk around the building to see the Halema’uma’u Crater in the distance. Lots of fumes/steam/smoke was billowing out of it. We took a few pictures, but quickly decided to go to the Jaggar Museum on the other side of the caldera where we could get a better view of the lava rising in the crater. 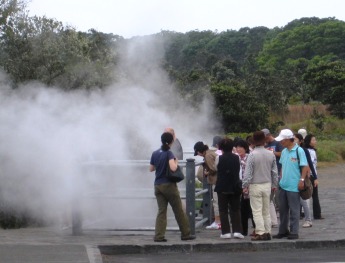 tourists at the vent

On the way, we stopped at the vents and took pictures of the tourists standing in the steam, who were taking pictures down the hole. My first thought: are they nuts? But then I remembered doing the same thing four years ago. I guess tourists who are hungry to have the whole volcano experience will do things that a resident, seeing and experiencing the effects of volcanic fog (vog) on a regular basis, chooses not to do.

As we got closer to the crater, we could smell more sulfur. Getting out of the car at the Jaggar Museum, we felt the oppressive air hanging heavy. A placard said that on a typical day, Kilauea vents belch out several hundred tons of sulfur dioxide every day! We walked up to the observatory area, and saw more fumes pouring out of the crater. This was a closer, better view. We could see a gray mass at the bottom; just below that was molten lava. At night we would have been able to see a red glow.  But during the day it was not particularly spectacular. And if it had been, if the crater has suddenly filled and spilled out over the caldera floor or had erupted with force, we surely would have been ushered out of the park.

Halema’uma’u Crater within the Kilauea Caldera; the bottom looks like gray mud.

There really was nothing more to see, so we headed home after spending only about an hour in the park itself. One thing we learned is that once a person reaches 62, s/he can get a lifetime annual pass for the price of entrance into the park – any national park. I only have 18 months to wait for a free pass forever to the US National Park System. That’s a deal! We’ll see if it survives Congress.

One of the Kohala Pu’u in Waimea that collectively rise to 5480 ft.

I don’t often stop to think about the fact that I live on an island with one volcano (Kilauea) that has been spewing lava from a rift vent every day since 1983, and four other volcanoes that are active or dormant. The one at the north end of the island, Kohala, is considered dormant, as its last eruption was about 120,000 years ago. Much of it fell into the ocean millennia ago, and it is hard to see any kind of a peak. From Waimea at 2500 feet, one sees a series of hills that gradually rise to 5480 ft.

Mauna Kea is to our south and we live on it’s flank. It is the tallest volcano at 13,796 ft, and, when measured from the sea floor, is taller than Mount Everest. It last erupted 4600 years ago. Mauna Kea’s summit now contains twelve observatories from countries around the world. I can see them on clear days during the daily drive from Honoka’a to Waimea. Waimea sits on the saddle between Mauna Kea volcano and Kohala.

Hualālai (8,271 ft) is to the south and west, and last erupted in 1801, 19 years before the missionaries arrived. You can still see that lava flow all around the Kona airport. Unfortunately, Kona has grown up on its flanks. Geologists expect it to erupt again in the next 100 years. I’m glad I didn’t move there.

Mauna Loa (13,769 ft) is the volcano that scares me the most, though I live far enough away. It is still very active, producing lava flows that reached the ocean eight times since 1868, and erupting every six years or so over the past 3000 years. We are overdue for an eruption as the last one was in 1984 when a flow came within five miles of Hilo! The flows from Mauna Loa are very large, with lava produced at a higher rate than from other volcanoes.

On a clear day, from Kohala Mountain, you can see three of the other four volcanoes: Mauna Kea – top; Mauna Loa – distant middle; Hualalai – bottom.

What this means is that vast amounts of lava can reach the ocean within a matter of hours on the steeper west side of the island to the south and north of Kona. People who lived in its path would have to evacuate very quickly, and expect little left when they returned. Developers are actively building resort communities on the northwest side where people could need to evacuate. But it shouldn’t be a shock to those that live there now, as they are surrounded by massive lava fields. I’m thinking they just don’t think in geologic time.

Besides the volcanoes, we also have earthquakes; the instruments in the park record several a day, most of them unfelt. With earthquakes come the possibility of tsunamis. Luckily we live at 1000 feet.

All of this is sobering if one takes the time to reflect on it. While personally, our biggest risk is earthquake, any damage to one of our harbors through volcanic or wave action would bring its own set of problems. We could pay a very high price for living in Paradise. But given Superstorm Sandy, the snow storms and other bad weather on the mainland in the past couple weeks, I’ll take my chances.

For an essay about a successful night viewing of the lava lake two years later, see Lava Lake Rising.

For an essay that speaks to Halema’uma’u Crater as Pele’s home, see New Year’s Encounter with Pele.

I'm a writer and author. Check out my book, Manifesting Paradise on Amazon, and my blog, ManifestingParadise.com. I talk about Hawaii and the transformation tools I used to achieve my dreams.
View all posts by Diane Scheurell →
This entry was posted in lava, lava lake, volcano and tagged Hawaii National Volcanoes Park, Hualalai, Kilauea Caldera, Kohala, Living on five volcanoes, Mauna Kea, Mauna Loa, rising lava lake in Halema’uma’u Crater. Bookmark the permalink.

1 Response to Living on five volcanoes