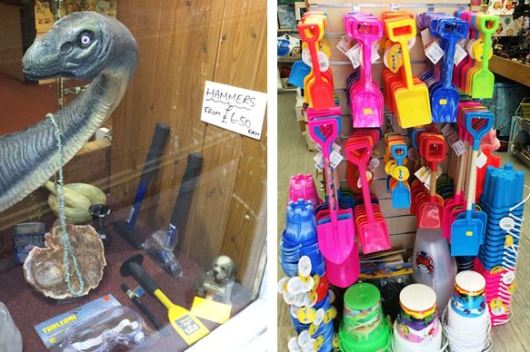 The lovely little seaside town of Lyme Regis along England’s Jurassic Coast is a treasure all by itself. Add the opportunity to find and keep a fossil, and you have the recipe for a great holiday. You’ll find everything you need to enjoy the beach in the local shops, from sand pails and shovels to geologist hammers and safety glasses. And if you don’t care to wander the beach, you can buy a fossil in the curio shops.

On our second day in town, my daughter and I had great hopes that we’d find some fossils on the Lyme Regis Museum’s Fossil Walk. Paddy Howe, the museum’s geologist and our guide, guaranteed we’d find something. We gathered at 9 am in front of the museum, three parties of two, plus Madeline, a geology student from Cambridge who comes down to help out every holiday she has.

Paddy began by apologizing profusely for the weather, which was sunny and warm. He said it was much easier to find fossils on rainy days because storms and rough waves wash fossils out of the cliffs, and the less-motivated fossil hunters stay home. But after being cold in London for more than a week, I was personally thrilled with the sunshine.

We took the other direction from our beach adventure the day before, and hiked along the new (2015) Church Cliff Walk which safely opened up the beaches east of town to fossil hunters.  There, Paddy showed us fossils so we could learn to recognize the objects of our search. While Mary Anning and others found heads and full fossilized skeletons of large marine animals such as ichthyosaurs and plesiosaurs, we were far more likely to find spine bones and coprolites (poop).

He also showed us (left to right) belemnites, gryphaea, sea lilies and their stems, and a sea urchin. The gryphaea are an extinct oyster called devil’s toenails for obvious reasons.

Of all the things he showed, what I really wanted was petrified poop…and maybe a devil’s toenail. We’d be walking along the coast down to the flowing mud slides. They move continuously, carrying fossils out to sea like a conveyor belt. Between here and there, we’d cross several different kinds of topography, including small stones on a sand beach (which reminded me of the beach on Staten Island I visited 10 days before; see Thinking like a Marble), a section of large rocks and mud, a spot rich in belemnites, and the mud flow. After a safety talk, we began our fossil search.

Paddy explained that about halfway down the beach, we’d be crossing the debris from the town dump that spilled in a large landslide in 2008. He warned us of the broken glass and metal strewn about. Dump? Great! There had to be treasure in that.

Indeed, I found pottery shards and sea glass everywhere. People come here to find fossils; they leave the glass and pottery. So, of course, my newly learned beachcombing skills kicked in and I picked up lots of bits. I even found a piece of citron-yellow sea glass, somewhat rare as I understand. 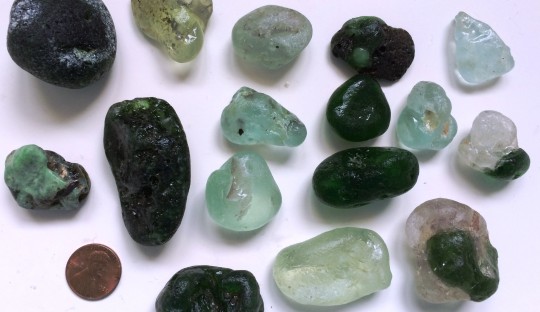 The closer we got to the dump spill, the more melted fused globs of glass I found (my first). Paddy said that in decades past, the dump was regularly burned, melting glass in the process. I even found clear and green glass globs fused together. 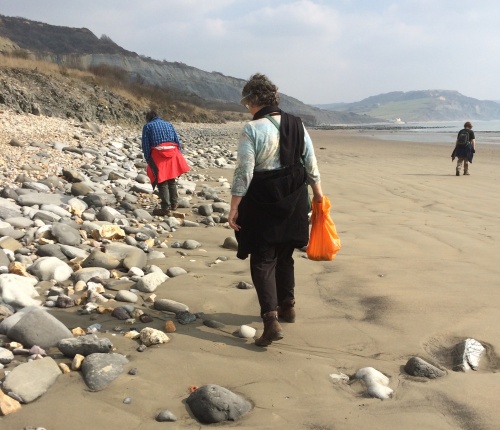 Then Paddy asked me how I was doing, and I sheepishly had to admit to being been temporarily diverted, but that I was back on fossils now. He taught us that we’d be most likely to find the metalized ammonites near other metal because they had about the same density. So we searched near the metal scraps from the dump, and indeed, we found fool’s gold lumps and ammonites. Every time I came across something brown/black and long, I picked it up to ask Paddy if it was fossilized poop. Nope. 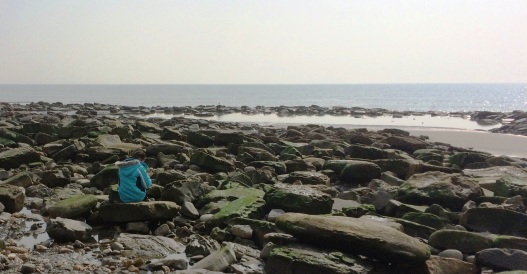 Crossing the mud slide proved to be a bit of a challenge. Some of the mud was very soft and I sunk an inch or so. I may have to invest in some wellies if I decide to pursue this hobby.

But the trek was worth it as I found a rock in the mud that had four tiny ammonites and/or impressions embedded in it. In one orientation, it looks like a strange face. And Madeline kindly gave me a fragment of a larger ammonite. The gray mud felt very silky, but was drying to the skin. Apparently it has a high oil content. 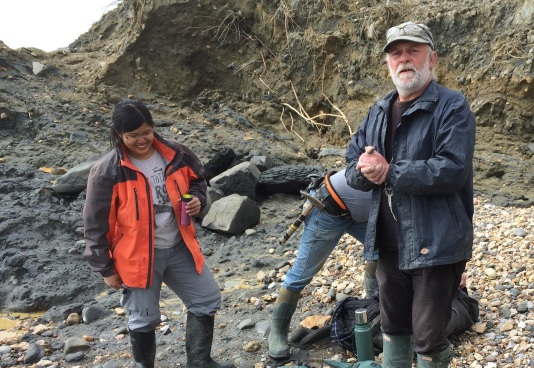 When Paddy found something interesting, he gathered the group and asked us to spot the fossil. Much of the time I didn’t see it until he pointed it out. Then he’d pick it up, talk about it, and pass it around for examination. He gave most of the specimens to the participants. My daughter and I received a fossilized sea urchin and a bone from the paddle of an ichthyosaur (somewhat rare), and later, an ammonite.

At the end of the walk, he gathered several concretions, hoping to find ammonite samples within. As he cracked them open without finding much, he again apologized for the bad (i.e., sunny) weather that had kept new larger concretions hidden. He gave us one of the ammonites that he exposed, and polished it up for us in his Fossil Workshop later that day. And he showed us how to use a geologist hammer. It’s best to use the edge of the hammer part when splitting rocks, rather than the pointed side. And always wear safety glasses.

We each made our own way back to town at our own pace. The tide had retreated and I could walk near shore in an inch or two of water rather than try to balance on the rocks. My leisurely pace allowed me the time to appreciate and be present to the wild beauty of the shore, looking backward at where we had been and forward toward the village. We would be leaving tomorrow, so I gathered in the sights, sounds, and smells as best I could.

Back at our flat, I examined my treasures. I had a couple ammonites and two sections of belemnite, the extinct squid-like creatures that left behind their bullet-shaped internal shell. Madeline gave me a rock showing crystal growth, and one of the participants, Richard, gave me a chunk of fossilized poop. God bless him. It’s the dark piece at the left, about a third of the turd. But no devil’s toenails.

And from the dump, I found some interesting pieces: an aqua glass stopper (without its top), part of the ceramic from an old light fixture and a brass fitting to which I took a fancy. When other participants saw me collecting strange stuff, they gave me a Bakelite stopper and a little white ceramic top they had found.

Later that day, we visited the Lyme Regis Museum. The ichthyosaur skeleton allowed us to understand our paddle bone fossil. It was originally a finger bone. Much like dolphins and whales, these reptiles started out on land and went back to the sea millions of years ago.

I also saw a beautiful devil’s toenail for sale in the museum shop and was tempted. But I’d rather collect my own than buy it. The fun is in the doing and the memories created by the experience.

The next day my daughter and I rose early and attempted to visit the East Beach one more time before we had to vacate the flat. Alas, the tide was in and we were thwarted from reaching the beach. Where yesterday we had access to a large beachfront, today only the ocean met us at the steps leading down from the Church Cliff Walk. But Paddy will be happy for today’s excursion when the tide goes out again; it’s raining.

Clearly two days is not enough time in Lyme Regis. Even my urban-loving daughter surprised me by saying we really needed a week here. Maybe we’ll be back, searching for that devil’s toenail and more fossilized poop when the tide is out. Who wants to come along?

PS. 4/10/16.  If you want to gain a better appreciation of Lyme Regis, Consider these three books with the village as the setting: Jane Austin’s Persuasion, John Fowle’s The French Lieutenant’s Woman, and the most important, Tracy Chevalier’s Remarkable Creatures, the historical novel about Mary Anning.

For our adventure the day before at Lyme Regis Beach, see I found a fossil! Nope, not yet at Lyme Regis, England

I'm a writer and author. Check out my book, Manifesting Paradise on Amazon, and my blog, ManifestingParadise.com. I talk about Hawaii and the transformation tools I used to achieve my dreams.
View all posts by Diane Scheurell →
This entry was posted in daughters, Travel, Using my transformation tools and tagged ammonites, beachcombing, coprolite, fossils, Lyme Regis UK, sea glass. Bookmark the permalink.