Last month Stacy treated me to a Captain Zodiac Rafting, Dolphin and Snorkel Adventure. It was a very generous ‘thank you’ for feeding her cats and bringing in her mail for a few days while she was gone. Our destination was Kealakekua Bay, the famous spot where Captain Cook got himself killed.

As we walked down to the Honokohau Marina to board our vessel, our leader, Captain Colin reminded us that the Captain Zodiac Rafting Expeditions was Kona’s most experienced ocean rafting company, now in their 42nd year. For me, “rafting” conjures the image of floating serenely down gentle rivers in small rubber rafts. But this was a 24 foot, rigid hull fiberglass Zodiac Hurricane 733 the same boat used by the US Coast Guard and the Navy Seals. Still, the pontoons for seating are just inches above the water line and the boat has a low center of gravity. He explained there was a 4000 lb weight in the floor under the console, so unlike with rafts, we should have no fears of flipping over.

The boat normally seats 16, but today it held only five passengers: a family of three, Stacy and me. The Captain told us that when we took off, especially with the light load today, we’d be hydroplaning and the front end would rise out of the water. The most stable seats were at the back, so I planted myself firmly just ahead of the 150 hp motors, even before we took off.

I was a bit nervous…probably more so about snorkeling than the ride. I’ve only gone a handful of times, mostly with tours. I don’t know why I resist snorkeling with friends. It may have something to do with sharks. We’ve had eight shark attacks in the islands this year. And you can’t see something approaching from above or to the sides when your face is in the water looking down. I also learned that one guy was stabbed in the heart by a swordfish right in this harbor so I can add that to my list of water terrors.

We eased out of the marina. Once we got to open water, Captain Colin opened it up, zipping along at about 32 mph, while joking about driving a $160K hairdryer. It ran like a jaguar, smooth and fast; there was no point in trying to keep my hat on. “Rafting” is definitely the wrong word. 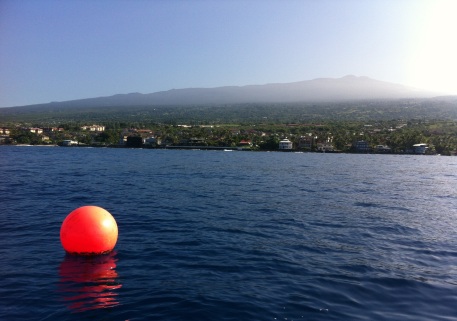 He could also stop on a dime as he demonstrated when he halted the boat near a buoy – the turning point for the swim portion of the Ironman Triathlon last month. We could see a haze hanging over Hualalai, vog from Kilauea, but out here, the sun shone brightly. He also slowed down to see a man on a boat bring in a fish he was fighting. Captain Colin explained that you don’t need a license to saltwater fish in Hawai‘i. There is no limit on the number of fish you can catch per day, and there’s no legal weight limit, though there is an ethical one. (But there are some Hawaiian marine areas with fishing regulations including Kealakekua Bay.) This is so different from what I know of Wisconsin fishing rules. 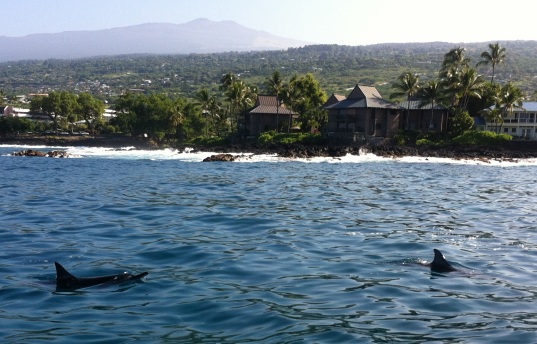 We stopped again for a pod of Spinner Dolphins. Captain Colin explained that dolphins rest during the day in these bays and feed on squid at night off-shore where a column of water rises from the bottom. The column contains squid, feeding on fish, who are feeding on plankton. This food-laden column comes up where the ocean drops off from 500 feet to 3500 feet in the space of a few yards. 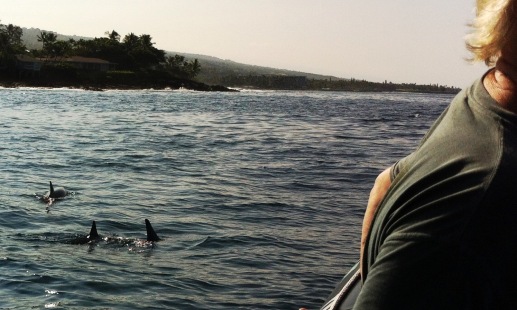 The dolphins were delightful, swimming around us singly and in groups. Side-by-side pairs glided by, surfacing and diving in perfectly synchronous swim. They came right up to our boat, but avoided swimmers in the area from another boat that had disgorged its passengers. It seems they don’t like people chasing them. We even saw a few spectacular spins – 360 ̊ rotations in the air along their longitudinal axis, and the source of their name. These were Gray’s or Hawaiian Spinner Dolphins one of four subspecies worldwide. They are very social, and promiscuous.

Then Captain Colin spied a large catamaran coming up and said, “We have to go. We want to beat that thing to Kealakekua Bay.” While the dolphins were engaging, he wanted to make sure we had the bay to ourselves for some time. It didn’t take long to reach the bay which can only be accessed by sea, unless you want to hike four miles round-trip, down and up a 1500 foot elevation change. As we cruised in, the white Captain Cook Monument looked oddly out of place in this natural spot.

He tied up to a buoy and gave us ‘the talk’ – “Don’t put sunscreen on here; it will wash off into the bay and harm the coral. Don’t get close to the monument; the current is strong and you can get pushed into the coral. It will hurt and could take some time to pull back out. Don’t touch anything! And don’t get out of the water: I lost two Aussies last week who wandered into the brush behind the monument. It took 45 minutes to find them.” Then we raised our right hands and pledged “not to touch anything!” Captain Colin did it in a fun way, but he really wanted us to internalize that point.

He helped those who needed assistance (me) with a mask, breathing instructions and a noodle. The family had brought their own equipment including new masks. He offered them some toothpaste to clean off the film that manufacturers use to prevent the masks from scratching in shipping. They were dubious, but applied and rinsed off the toothpaste. Later they reported that their masks didn’t fog at all.

When I finally got in the water and put my face down, I recognized, once again, that I love snorkeling. The first thing I notice is the coral – so many kinds, colors, sizes and shapes.

And then the fish. We have so many colorful fish in Hawaiian waters and the water in this bay is exceptionally clear. I saw yellow tangs, sergeant majors, convict tangs, other yellow and black fish (raccoon butterflyfish? fourspot butterflyfish?), black durgons and either pennant-fish or Moorish idols, all swimming around the coral. Stacy also pointed out some small elongated fish swimming closer to the surface of the water.

I watched a parrotfish gnaw on a coral rock and could actually hear him chewing. I always figured that Hapuna Beach sand was sticky because it was local parrotfish poop – the sticky part is my theory.

Stacy grabbed my arm and pulled me over to a spot with a school of yellow tangs, just hanging around. I always feel safe going into the water with her. She was a lifeguard in her younger years and loves to swim.

While suspended above the coral and fish in very clear water, swaying in the gentle wave currents, taking the occasion picture with an underwater camera that could not possibly capture what I was seeing, an hour and a half passed by quickly. I was one of the last ones to get out. At the very end I got a snoot-full of salt water up my nose, clearing my sinuses. Captain Colin gave me a fresh water rise as he helped me into the boat. There was no need to use the towels – the sun was warm with no breeze – just perfect for drying off.

“You can’t feed that to the fish!”

“Why not? That’s what they taught us on a cruise in Canada,” she retorted.

“You can’t do that here. It’s a protected area.”

“But they like it! They are eating it,” she argued.

“Yes, and they’ll eat vomit, too. It’s not good for them! That stuff is just a molecule away from being plastic.”

But he’s also been privileged to help families say good-bye to loved ones, spreading ashes at sea. And he captains the boat for the NBC film crew during the swim portion of the Ironman. Sounds like the perfect life for someone who loves boating.

We took this time to ask about the large brown fish we saw. He pulled out a fish guide and showed us a picture of the roi grouper; yup, that’s the one. Roi is a species of fish introduced to Hawaii waters in 1956. Since then the population has exploded and they have become the dominant predator in the reefs. People avoid eating them because they are known to carry the ciguatera toxin. 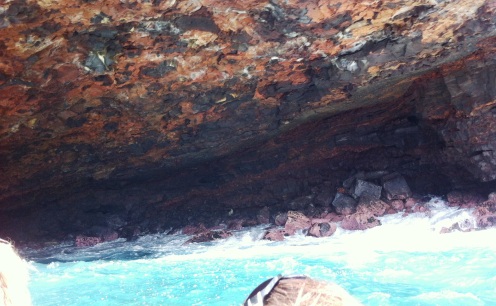 A sea cave at close range on the Captain Zodiac Adventure

The snack revived us. But our adventure was not over yet. All the way back to the marina, Captain Colin thrilled us with fast moves alternating with stunning views of the coast. His maneuverable little boat took us very close to the shoreline cliffs containing lava tubes and sea caves. We got so close that it was easy to imagine large chunks of cliff falling off into the sea as an ancient sea cave finally crumbled. The mana of the cliff rocks was very powerful, and the sea matched it: we watched as huge waves pounded the cliff walls and exploded up as high as 60 feet, occasionally splashing us with water.

Perhaps the most spectacular experience was the blowhole because we participated. He showed us that receding waves have to uncover a normally-underwater hole in the lava wall to set up conditions for the blow hole to spout. As large wave sets came in, he rocked the boat back and forth in rhythm with the waves until one was forceful enough to push into the hole and burst out the top.

None of this would be possible with the larger boats from other tours I’ve seen. They are too big to wedge into these small bays for the kind of close encounters we experienced with Captain Colin. He was all about wanting to thrill his guests, and he succeeded.

While we didn’t see any whales on this trip, we didn’t really expect it. Most whales arrive in Hawaiian waters in November/December, though Captain Colin told us that one year he saw an over-eager adolescent show up in August.

Near the harbor, I saw something up close that I’ve seen along the Kailua shore many times. I always thought was a floating bar, a small platform with a couple structures and palm trees aboard. Captain Colin said no, it was a jet-ski tie-up. No booze. Pooh. I was looking forward to getting out there some day.

A huge Mahalo to Stacy for taking me, and to Captain Colin for the adventure, and, of course, to the jaguar-like Zodiac he so ably controlled. Yup, “rafting” is the wrong word.

Postscript: After seeing the disposable camera pictures, I finally broke down and bought an underwater camera. Next time they’ll be better.

I'm a writer and author. Check out my book, Manifesting Paradise on Amazon, and my blog, ManifestingParadise.com. I talk about Hawaii and the transformation tools I used to achieve my dreams.
View all posts by Diane Scheurell →
This entry was posted in getting out of my comfort zone, Hawaii plants and animals, Hawaiian reef fish, lava sea cave, reef snorkeling, sightseeing on the Pacific Ocean, Things to do on the Big Island and tagged Captain Zodiac, Captain Zodiac Rafting Expeditions, Kealakekua Bay, snorkeling in Hawaii, Spinner Dolphins. Bookmark the permalink.

3 Responses to Rafting is the wrong word – Captain Zodiac adventure