An interruption becomes an obsession – heart of palm

Posted on November 4, 2015 by Diane Scheurell

Recently a friend, Steve, offered to take down one of the loveliest trees in my yard, but also potentially, the most deadly: a Royal Palm, almost 50 feet tall, standing on the edge of the property. We worried every time a 20-foot frond dried and appeared ready to fall – on my neighbor’s house, car, or kids. Even the fruiting bodies were huge and heavy.

Removal day arrived with a mild rain. I suggested we postpone, but Steve and his friend had hired a tree climber; they couldn’t wait. It made me nervous because I knew he’d be using a machete to cut the fronds. I gave them all hardhats and tried not to think about it. Besides, I was busy with a self-imposed deadline on a writing project, so I got right down to business with my laptop and morning coffee.

Occasionally I heard the guys conferring outside the window and calling up to the climber. Soon they began shouting and I heard the first frond crashing through my banana plants. More shouting and cheering rang out as each frond hit the earth. Then the guys took a chainsaw to the trunk for what seemed like a long time. I felt the house shake when it thundered to the ground. Cautiously peeking out the window, I saw that the whole trunk landed on my side of the fence. Thank God! 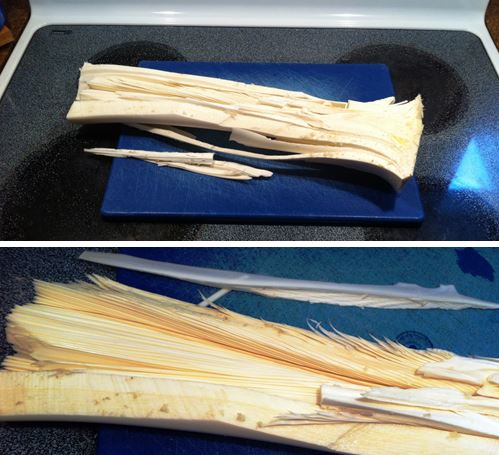 Steve came to the door. The tree climber had extracted the heart of the palm for me. It caught me by surprise. I hadn’t thought that something edible would come out of this process. The heart was huge: four inches in diameter and 18 inches long, with a frondy feathery section and a solid section. Pieces of the feathery section actually had a fan-like structure.

I took it back outside and we all tasted it. It was mild, and very slightly sweet/nutty. But there was no way I could eat this whole thing raw. Of course, I knew nothing about preparing heart of palm, much less a fresh one.

The tree climber said that it was awesome fried in olive oil. I decided to take a break from my project and find out. I checked the Joy of Cooking, but it didn’t have anything on sautéing them. So I checked the internet. There were a few comments about cooking with fresh hearts, but small ones, a few inches long and an inch in diameter. I saw some flavoring ideas and sautéed a small section with olive oil, garlic, salt and lemon. While it didn’t go very well with my morning coffee, it was very tasty. I was hooked. 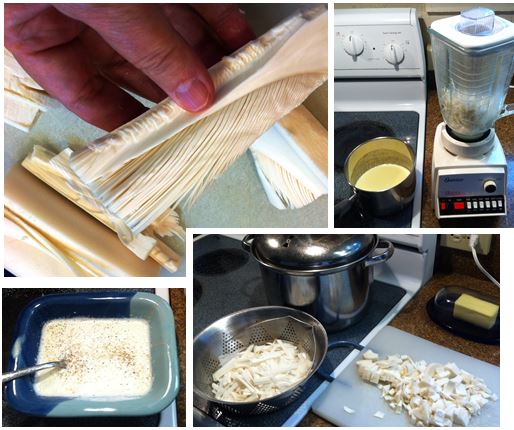 I gave up my writing project and scoured sources for lunch ideas. One said steamed fresh heart of palm has a lobster taste with a hint of corn sweetness. So I steamed the feathery part. It definitely had the sweet corn flavor but no lobster taste. Perhaps the lobster taste is depended on the kind of palm. I used the rest of the steamed heart to make a cream soup. I sautéed it in butter with garlic and onion, and put it in the blender with warmed whipping cream, serving it with pepper and salt to taste. My daughter said, ”Yum, but too much garlic.” I thought it tasted like a mild cream of potato soup plus the yolk part of an egg fried in butter. Very good but so rich; this would best be eaten in tiny thimble cup portions as a side to something else.

For supper, I used the solid part of the palm. It had the consistency of a zucchini – firm when sliced. I stir-fried it with onion, celery, carrots, zucchini, yellow squash, and a can of mushrooms; it was what I had on hand. When I added some already-cooked chicken marinated in ginger, sesame oil and soy sauce, my family agreed to eat it.

That night I went to bed with heart of palm dancing in my head, and woke up eager to try a new set of recipes. For breakfast I envisioned an omelet with kale and heart of palm. But first I needed kale. Luckily, Dianne lives only two miles away and her husband grows it. I called her – “Yes, come over.” She joined me at the raised beds and we picked kale, though I knew what was coming next. “Now you have to take some eggplant.” Rats. I like eggplant, but not in the quantity she wants to give it away. I managed to slip out of there with only three small aubergine, now destined for the omelet. 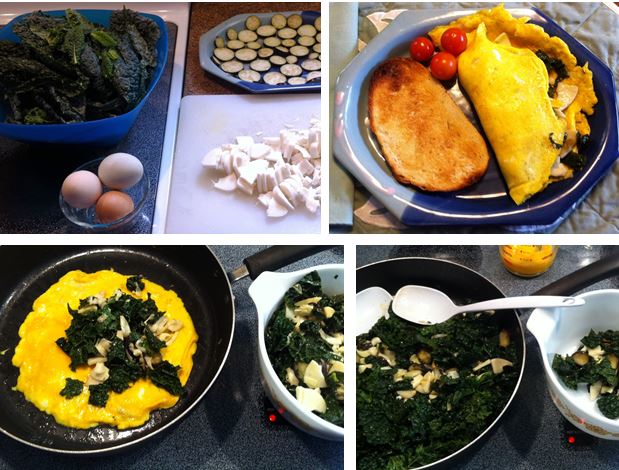 I love chopping veggies, methodically, almost meditatively. When I finally took notice of all I had cut, I realized it was too much for an omelet, especially since my family was still sleeping. So I improvised, cooking all of the ingredients and saving most of it for that night’s soup. I added the rest to a couple of fresh eggs from Anita. Wow, it was tasty. The palm’s mild sweetness complemented the stronger kale flavor. 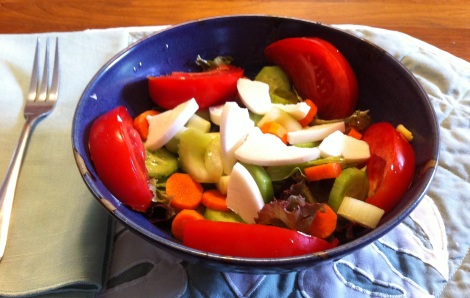 By now my family was looking at me oddly. They were not interested in the lunch I made, a salad with raw heart of palm. They didn’t even want to hear my critique (it added a mild nutty flavor and firm texture). They were sick of my experiments.

For supper, I used the remainder of the palm/kale/eggplant mixture, adding it to sautéed onion and garlic, mushrooms, chicken broth, and pepper and salt to taste. For a zing of citrus, I added the juice from two calamondin. Also called calamansi locally, it’s a hybrid between the mandarin and the kumquat. I ate three bowls.

For breakfast the next day, I had the remains of the veggie soup. When you live in a multicultural place like the Big Island, you learn to eat strange things for breakfast.

With the last of the heart, I returned to the first thing I made, sautéing it with garlic, salt and lemon. Uhmmmm. I’m not Sonia Martinez, our local cooking columnist and cookbook author, but I think I ran some good experiments.

Finally, I could cleanse myself of this obsession and get back to my project. The interruption was over. Still, ever since then, I’ve been eyeing the other palm trees in my yard. Perhaps there is another that is dangerously located…

I'm a writer and author. Check out my book, Manifesting Paradise on Amazon, and my blog, ManifestingParadise.com. I talk about Hawaii and the transformation tools I used to achieve my dreams.
View all posts by Diane Scheurell →
This entry was posted in eating in Hawaii, eating right, plants in my yard and tagged heart of palm, how to cook heart of palm, Royal Palm. Bookmark the permalink.

11 Responses to An interruption becomes an obsession – heart of palm