Beachcombers are a hearty breed, as I discovered at the International Beachcombing Conference. Nothing seems to deter them from their appointed rounds, especially the weather. Day 1 of the conference, I woke up to rain, thankful that the schedule was for talks until lunch with a field trip in the afternoon. Everyone was hoping for better weather as the day progressed, but it was clear that we’d be going regardless.

I could have stayed behind, but I was getting into the spirit and decided to tough it out. (I was also getting a reputation as a wimp, mostly self-induced, and I had to dispel that image.) Besides, it stopped raining; how bad could it be? After a stop at the Ocean Shores Coastal Interpretive Center, we headed to Damon Point, a spit of land between the ocean and Grays Harbor. I wore my hat with the under-the-chin string, figuring I’d need it to anchor the hat on my head. The moment we stepped out of the sheltered lane that led to the beach, the wind yanked it back so hard that it semi-choked me. So I secured it with the hood from my jacket. 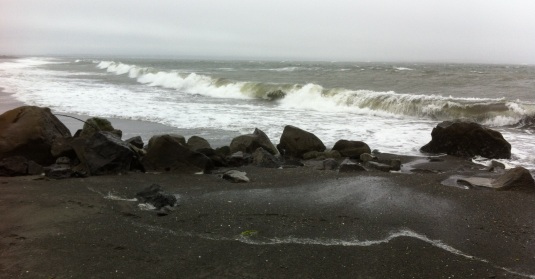 The wind was blowing something fierce, straight off the Pacific Ocean. With waves crashing on shore, I watched as seagulls were held in place – flapping and attempting to move forward but going nowhere. I knew how they felt. I was wearing my five layers so my core was warm, but I could feel the wind blowing through the mesh of my athletic shoes and my knit pants. I think I needed skinny pants (not that I have any), because the wind flapped my loose pant legs like someone snapping a towel: wap-wap-wap.

Later, the string on my hat demanded my attention again. The end whipped around wildly, repeatedly hitting me in the face until I grabbed it with my teeth. Unfortunately it tasted really bad so I had to spit it out. No matter – my face couldn’t feel the blows anymore anyway because it was numb from the wind-chill and the blasting of the grit off the beach (a free microdermabrasion facial!).

We use the buddy system, but my buddies were getting away from me.

As the wind howled, it ripped the tears from my eyes and the drips from my nose. I couldn’t see at all, not only from the excessive tearing but because a fine salt-spray coated my glasses. I thought about hiding downwind of the driftwood log piles on the beach, but I didn’t want to lose my beach buddies, so I trudged on, my shoes crunching on long stretches of crab and clam shells.

The wind never did let up. Every once in a while, I’d put my back to the wind, stand still and blink my eyes dry enough to see. Then I’d spy something on the beach that caught my attention despite the tears. As I reached for it and came closer to the gravel and sand, my eye would rest on a couple of other things of interest.

By the time we turned around to head back, I had a pocketful of very small stones. For some reason, they spoke to me. Some reminded me of caramel and vanilla jelly beans – just about the right size. These turned out to be quartz. I also pocketed a few green stones – one small jade and several jasper, though I didn’t know it at the time I picked them up. Placed in shells from the Swap Table, they looked quite nice.

Karleen, Debbie, Roxanna, Diane and Kathy. When she shared the photo, Debbie quipped that there were others with us “but they blew away.”

As we headed back to the cars, one of the gals pointed out a local guy at the edge of the waves, holding his shoes. He was walking in the water in bare feet! “He’s searching for whatever is rolling in the waves coming ashore.” That blew me away.

The next day’s fieldtrip was Ruby Beach, about 90 minutes up the coast. A storm was coming is so we moved the fieldtrip to the morning to try to beat it. All the way there, the local historian and avid beachcomber, Gene, entertained us with stories of her life growing up here, the history of the Quinault Indians and her special friendships with them, the logging industry, local shipwrecks, and Sasquatch. She gave enough convincing stories about Big Foot that it was easy to believe, especially when we detoured to see one of the last and the largest old growth Red Cedar trees still standing. The old tree was on a spooky, misty, almost dirt road, covered with a canopy of trees. This place made the hair on the back of my neck stand straight up. I was glad to get back to the car and continue our journey.

Even though everyone said that Ruby Beach was special, I was not prepared for its wild beauty. Stunning – I’d never seen anything like it. The day was gray with a heavy blanket of clouds and the scene looked like something out of an Ansel Adams photo collection. The vista unfolded, revealing itself to us, as we made our way through the trees along the graveled path to beach level. The only sound was the crashing of the waves.

Large rock formations off-shore just hung there in the mist. A stream ran from cliff level down into a large pool full of beached and floating logs. 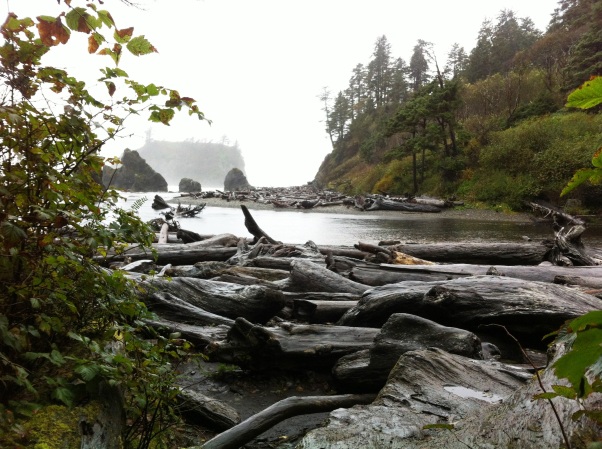 A 10 – 12 foot eroded flat root ball beached itself on the far end of the pool. What a fantastic micro-environment! 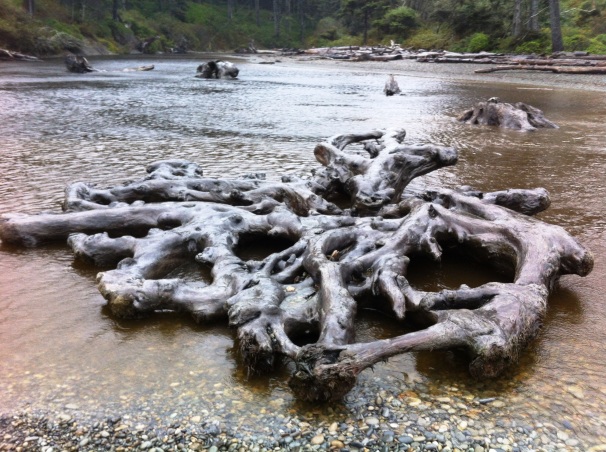 The beach was littered with full size tree logs that had come down the stream and entered the ocean, then were spit back out. Imagine the storm that pushed these logs 40 or 70 feet onto the beach.

Me with the one who got me into this – Deacon Ritterbush, aka Dr. Beachcomb.

One log stood out. People had stacked flat beach stones in little prayer piles. And while some consider stacked rocks to be a form of graffiti and an ecological disturbance, I found this log beautiful.

The beach itself was largely comprised of smooth oval rocks, fist size and larger. I was not about to schlep large stones home, so I just enjoyed the surroundings, making a physical meditation of my time here. I was actually comfortable, because the wind was mild.

As I watched and listened to the waves crash on shore, I noticed that the rocks ended right at the reach of the waves, with sand in the wave-breaking zone. I heard a subtle clacking, like bamboo wind chimes and investigated while enjoying nature’s music. It happened whenever a wave slapped onto the rocks just out of reach of most of the other waves. Its momentum clattered the rocks against each other as it drained through them back to the ocean.

Kalli, Debbie, Rebecca and Tracey at Ruby Beach in the rain.

Then the storm came in and we found ourselves in the rain. But this was such an exquisite place that no one seemed to mind. We were gobsmacked by the wild beauty of Ruby Beach. I don’t think I would have enjoyed it more in the sunshine. We all slowly pulled ourselves away and retreated to the cars.

Climbing the trail, I noticed raindrops appearing at the edge of my cap bill, sliding to the right, and dropping off. I must have been wearing it at a jaunty angle. No complaints; Ruby Beach blew me away.

We stopped at Kalaloch Lodge to eat lunch and to dry our pants by the fire. Only Lynn thought to bring an extra pair of pants along. The rest of us just had to turn ourselves around at the fireplace like pigs on a vertical spit. 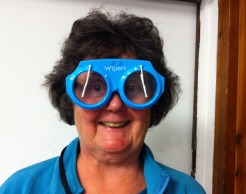 I learned much on this trip, but one thing I must act on to enjoy this new hobby is additions to my wardrobe like hiking pants, rain boots and a better raincoat. Just like Debbie, a fellow participant, I was dismayed to find that my rain jacket was only “sprinkle-proof.”

See also, I have reservations…, Be a kid again, and The Passionate Beachcomber.

I'm a writer and author. Check out my book, Manifesting Paradise on Amazon, and my blog, ManifestingParadise.com. I talk about Hawaii and the transformation tools I used to achieve my dreams.
View all posts by Diane Scheurell →
This entry was posted in beachcombing, Meditation and tagged Damon Point WA, Dr. Beachcomb, International Beachcombing Conference, Ocean Shores Coastal Interpretive Center, Ruby Beach WA. Bookmark the permalink.

4 Responses to Blown away – Damon Point and Ruby Beach