In my last post I mentioned that I’ve been eating wheat-free for 18+ months to eliminate migraines. I was skeptical when my Chinese Medicine Doctor, Alvita Soleil, proposed this solution. While she helped me get rid of headaches with acupuncture needles at the base of my head or in my ear, she insisted that preventing them was a matter of diet. After suffering over 45 years I had nothing to lose but the pain. It worked – no migraines for that whole time.

Then I found out that it’s only American wheat that is a migraine trigger. We use short-stemmed wheat developed for easy harvesting in our huge fields with our farm equipment. The Europeans still grow the long-stemmed wheat. The implication of this learning: I could eat all the bread I want when we were in the UK. Yes, I indulged, and no migraines! 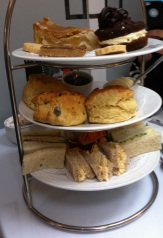 But it wasn’t just the bread. One afternoon in Glasgow, Scotland, we went to the Willow Tea Room on the recommendation of a friend and we pampered ourselves with high tea. I was expecting a couple of crumpets to accompany our tea but they brought us a three-tiered cake stand. The bottom layer was filled with dainty sandwiches including cucumber, hearty scones on the middle layer, and a slice of cake of each of our choosing on the top. What’s a trip to the UK without partaking in high tea, and what’s tea without finger sandwiches and cakes?

Then there were the Cornish Pasties and the meat pies. We had chicken & chorizo, and steak & ale pies in several pubs: English, Irish, I even saw a venison pie on one menu, but Jade didn’t want to eat there. She thought it looked a bit dodgy. The best was a steak and mushroom pie I had in Edinburgh, Scotland in a little restaurant two blocks from our flat. It had the flakiest crust I’d ever had in my life, and ‘m no stranger to pie crust.

We could have even bought a meat pie or pasty from the Royal Windsor Farm Shop. Yes, the Queen sells her produce, dairy products and meats several miles from the castle. The steak and kidney pie intrigued me, though with the way the Brits eat, it could have been real kidneys, not the kidney beans I imagined. Alas, we had no way of baking it at our bed-and-breakfast.

In Folkstone near Dover, we came across a bakery that made and served tarts of every conceivable flavor. They had many other items, but oh, the tarts! The friendly folk behind the counter were quick to tell us the owner would have wanted to meet us, because he had been born in Honolulu of an American Naval Officer and his English wife. So we returned the next day to meet Daryl and, of course, eat more tarts.

During the two weeks when we rented flats, we bought fresh bread every day for the next morning’s meal. Batards and crusty rolls with poppy seeds or sesame seeds, we served them warm with butter and honey or jam, or occasionally cheese. It wasn’t the full English breakfast we’d come to expect at our bed-and-breakfasts, but it was good.

The only bread that disappointed was the toast. The English apparently prefer to eat it cold, so it was brought to the table on a little cooling rack. No thanks.

Wonderful memories, but now I’m back to eating wheat-free. I tried a sandwich on the flight home and had a whopper of a migraine. Sigh.

I'm a writer and author. Check out my book, Manifesting Paradise on Amazon, and my blog, ManifestingParadise.com. I talk about Hawaii and the transformation tools I used to achieve my dreams.
View all posts by Diane Scheurell →
This entry was posted in eating right, Traditional Chinese Medicine (TCM), Travel, Using my transformation tools and tagged eating gluten-free, gluten as a trigger for migraines. Bookmark the permalink.