We are finally putting our Wisconsin house on the market. Please wish us luck for a speedy sale. It’s hard to say goodbye to the Grand Lady, but we don’t want to unconsciously tell the Universe that we prefer to keep her. So with this blog I acknowledge that it’s time to let her go. But first, allow me to honor her history with a tour. 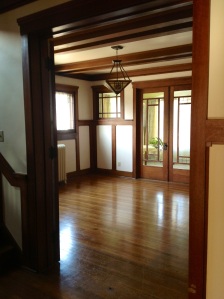 When we moved to Racine in 2000, I knew I wanted to live in the historic district, preferably on College Avenue, and within walking distance of work. College was the first paved (bricked) street in Racine. Today it remains the last brick lined public street in town.

We fell in love with the grand old lady the day we saw her. Do you hear them – the thousands of footsteps that have trod in this house? They’ve mostly been the same feet, because despite her age, only a handful of families have lived here.

She was built in the days of craftsmen working on one house at a time – 1904 to be specific. The story of that time is embedded in the very structure of this house. You can see the customs of the people and the limits of the technology available back then. Let’s take a peek through the eyes of the people living in 1904. 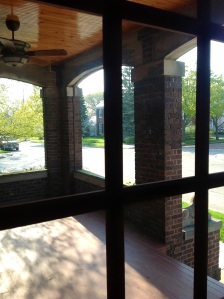 Back then people didn’t have TV, computers or air conditioning. They used the front porch to stay cool, enjoy family and visit with neighbors. It’s a social space represented by the items we found underneath while rebuilding it: a carving knife, tin soldiers, buttons and coins. I can envision Mother sewing a button onto a garment while Father whittled a toy figure, and the little boys played with their soldiers. Neighbors stop to chat while walking with their babies. I can see it because when we moved here, we met all our neighbors while sitting on our front porch. So rest for a spell out here. Go back to a less rushed, simpler time. Savor the relaxed pace. Then resume your exploration of the house and the era it brings to mind.

Step into the large foyer. Today, most homes do not have such a large greeting space. But in those days, the telephone was not in common use (only 1.4 million in all of the US in 1900). There wasn’t even a coast-to-coast telephone line until 1915. So visitors needed a place to wait while the family servant informed the lady or gentleman of the house of their presence. We loved the large radiator; it dried many mittens, hats and scarves over the years. 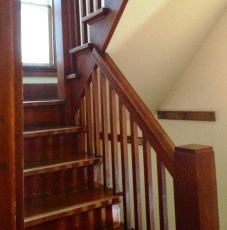 The foyer shows off the staircase, designed to make a statement as visitors entered the house. But there’s a second staircase at the back of the house for the servant, steeper with shorter treads. The sounds on that staircase were those of hurried working feet, cordoned off by doors so as not to disturb the owners.

French doors leading to the dining and living rooms are also signs of those times. Artificial lighting was not very effective and was expensive, so the doors allowed natural light to penetrate as far as possible into the house. At the same time, they also allowed the servant to close off rooms that didn’t need to be heated.

The only closet on the first floor is off the foyer under the staircase and it was not original to the house. This space once led to the basement, but was repurposed to add a closet. Imagine building a house these days without a closet on the first floor! People used clothing differently in those times (many fewer outfits) and had armoires to store clothing and fabric goods.

The living room shows the influence of the new style of architecture just gaining prominence, the Arts and Crafts movement. Matching oak built-in bookcases flank the fireplace. The floors are oak throughout the house, except in the kitchen (a place only a servant would see) and the bathrooms.

The 12 foot ceilings on the first floor were typical for larger homes and kept them cooler. We were surprised to see that the crown molding does not touch the ceiling in any room. We later learned that the style in those days was to hang pictures with specially designed picture hangers from the molding, rather than nail into the lath and plaster.

The office was probably used as a sitting room or library. It juts out from the house, allowing windows on three sides to bring natural light and breezes into the room. When we changed the light fixtures here, we discovered the house had been originally plumbed for natural gas lighting – electricity was too new at the time. 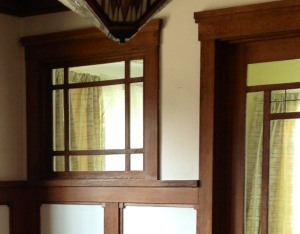 Look at the wainscoting and the detail of the interior window and door woodwork in the dining room. The patterns are repeated throughout the downstairs. These wood pieces were individually cut. In those days, labor was cheaper so, this was affordable. The family who lived here would have eaten in the dining room because the kitchen rooms were too small and not proper places for dining. The swinging door to the kitchen tells the story of the family’s side of the house versus the servant’s. The dining room side is a fine hardwood, but the kitchen side of the door is a coarser wood. 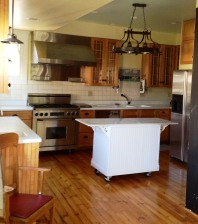 The kitchen was the domain of the servant, so the flooring has wide pine planks. The space was originally four rooms: the enclosed porch (now the sunroom), a very small kitchen, a storage room for canned and dry goods, and a butler’s pantry. Thankfully the previous owners remodeled the space and added lighting more appropriate for today’s family usage.

When we moved here 13 years ago, we took out the wall between the old enclosed porch and the kitchen to make a sunroom, my favorite room in the house. Here we sat with our morning cup of coffee looking at the back yard. Most of the home’s window glass is original, but in sunroom the glass has actually started to flow – those wavy lines.

The glass doorknobs on this floor add an elegance not found in newly constructed houses. The doors on all floors are individually crafted, paneled and solid; no such thing as pre-manufactured hollow core doors in 1904.

The placement of the windows in the master bedroom allows a nice breeze. In fact, the whole house was designed to take advantage of natural air flow – no AC back then, though we did add it to the house. The 12 foot ceilings allowed summer heat to rise, leaving cooler air at bed level. Large radiators keep the bedrooms as toasty as desired in winter. 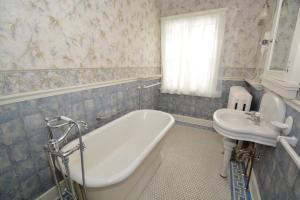 I often thought about the large bathroom as my own spa. It contains a wonderful cast iron tub with the more “modern” pedestal bottom, as befitted a grand home of the time, rather than the “older” clawfoot style. I wonder how many people have bathed in this tub in 100+ years.

Across the hall is another bedroom with its own bathroom. I loved this bedroom the most because it gets a full dose of morning sun, not that Faye particularly enjoyed that feature. The closet is interesting; it shows the use of an internal window (from the bathroom) to allow light in so artificial light was not needed. Jade had the bedroom above the office, the only room upstairs now without painted baseboards and crown molding. 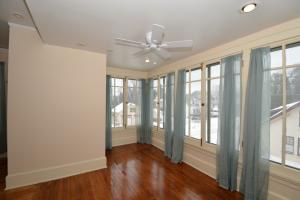 Finally we come to the sleeping porch at the back of the house with its four pairs of casement windows. In the days when the house was built, it was common to have sleeping porches for fresh air. This room was combined with a smaller bedroom that was probably originally a sewing room.

It seemed an extravagance for the home’s beautiful woodwork to extend up the back stairs to the third floor where the attic and servant’s quarters were, but the builders did not cut corners. The servant had a small bedroom overlooking the backyard and Lake Michigan with a small wall-hung sink in the closet, but no toilet. Hmm.

The basement contains something very unusual, an antique dryer. Heat was piped to the dryer though the radiator system. Garments and sheets were hung on the heated metal pipes inside the dryer box. This must have been a huge convenience to the servant, who otherwise would have to deal with cold and snow in winter and rain the rest of the year. I’ve also seen this period appliance at the Biltmore House in North Carolina. It would be cool to give it to a museum, but there’s no way to get it out of the basement without cutting it apart.

An apartment for the coachman still exists above the garage, complete with two closets, sleeping / living room, and a bathroom containing a sink, toilet and claw-footed tub. We always wanted to do something with that space, but never got around to it.

Finally, there’s no sign of ghosts. We conducted a ceremony when we first moved in to find out…but that’s another story.

So Universe, please help us sell the house. Let’s go for full price, or maybe a bidding war between two or more buyers. As long as we’re manifesting a sale, we might as well think big.

I'm a writer and author. Check out my book, Manifesting Paradise on Amazon, and my blog, ManifestingParadise.com. I talk about Hawaii and the transformation tools I used to achieve my dreams.
View all posts by Diane Scheurell →
This entry was posted in asking the Universe, home, Honoring tradition, links to my past, Wisconsin roots and tagged Historic district in Racine Wisconsin. Bookmark the permalink.