“Da kine” and other useful words

My visitors often ask me for some useful Hawaiian words. Of course, Aloha (hello, good-bye and so much more) and Mahalo (thank you) top the list. But I always think that a brief description of the Hawaiian language might be more useful to them. Unfortunately, all I can address is pronunciation and word recognition; that’s all I’ve learned so far.

The Hawaiian language has only 13 letters: eight consonants (h, k, l, m, n, p, w and the ‘okina – more on that later) and five vowels (a, e, i, o, and u). That’s not much to work with; there are only so many ways to combine these letters to make new words. So Hawaiian words often have multiple meanings. 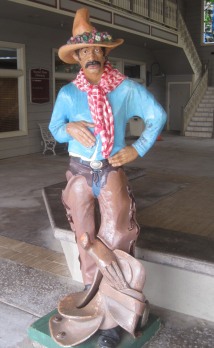 When the first Europeans showed up, Hawaiians had difficulty “importing” new words that included letters and sounds not present in Hawaiian. The first cowboys on the island were Españols, Spanish cowboys from California and Mexico. The Hawaiians called them Paniolo because the Hawaiian language has no “s” sound and Hawaiian syllables always end with a vowel (see rule below).

Lots of Hawaiian words look alike on first glance. And sometimes that’s all you have – a glance as you whiz past street signs. Community names are just as difficult for the auditory-challenged, like me. My friend, Dianne, lives in Paauhau, or is it Paauilo, Pahalo, Pahoa, Papaaloa, Papaikou, Pauka’a, Puueo, Puueo-Paku, or Puukapu, all communities on the Big Island’s east side? I’m a visual person, so it helps me to see the word written out, but that doesn’t happen in normal conversation.

Most of the letters sound like their equivalent English letter. That’s because the American missionaries who arrived in 1820 had to devise an alphabet for the spoken Hawaiian language before they could print a bible. But given that they were inventing this written language, I don’t understand why they decided to make the Hawaiian “i” sound like “ee,” and “e” sound like “ay.” That left “a” to sound like what the doctor asks you to say when they put a stick down your throat. Why complicate things?

Here’s a pronunciation rule that really helped me. All Hawaiian syllables end in vowels. (As an aside, the word “Hawaiian” is not Hawaiian because the last syllable ends in a consonant!) So “mahalo” (thank you) is just as it looks, ma ha′ lo. This rule is easy to implement, but watch out. You might start making everything that has the “right” set of letters into a Hawaiian word, like hu ma′ ne, when you whiz by the Humane Society, a story shared by my friends, Kim and Thomas.

The pronunciation gets a little more complicated when two vowels sit next to each other. Sometimes two vowels sitting together make a different sound, like the ai in Waimea (why mā′ a). But adjacent vowels are separate sounds if there’s an ‘okina (o kē′ na) between them. The ‘okina, ‘, looks like a backwards apostrophe or a left single quote mark. It indicates a glottal stop, as in the word Hawai‘i (ha why′ e) or Honoka‘a (ho no ka′ a). Unfortunately the ‘okina is often left out; the “e” and “a” in Waimea are separate syllables  but I don’t think I’ve ever seen Waimea with an ‘okina.

A practice that can make a very long word more manageable is to look for repeated fragments, like King Kamehameha; the two fragments are pronounced the same. As for emphasis, it is usually the second to the last syllable that gets that honor. So in Kamehameha, the first “me” gets a slight emphasis while the second “me” receives the main emphasis. Perhaps the most notorious word of this type is the name of our state fish: humuhumunukunukuapua’a. Try sounding it out.

Then there’s Pidgin, or more properly, Hawaiian Pidgin English or Hawaiian Creole English. This is not to be confused with Pidgin Hawaiian, which was the original Hawaiian-based communication used mainly by immigrants. That died out about 1890, when an English-based pidgin gained favor as the language of communication among the many people who lived and traded here. They added words and phrases from Japanese, Portuguese, Cantonese, Filipino, Hawaiian, Korean and other languages to form this new one. Check out You-Tube to hear it spoken.

(POSTSCRIPT: As of November 2015, Pidgin will be listed on the US Census Bureau surveys for questions asking what languages a person speaks. The government is only now catching up to the linguists, who have identified Pidgin as a separate language for some time.)

On top of that, there are about 100 other languages spoken in Hawai‘i. To help put this in perspective, the Big Island has only 187K residents total, and the whole state has only 1.4 million. Given the rural nature of the Big Island, and the fact that we are one of the most diverse county in the US, we hear lots of languages, including Pidgin.

A recent article listed the most common non-English languages spoken in Hawai‘i:

Despite the fact that it was fifth on the list, Hawaiian is an official language in Hawai‘i, along with English, as defined in the 1978 Hawaii Constitutional Convention. You often see Hawaiian words in official signage.

Here are some of my favorite Hawaiian and Pidgin words.

Da kine ‒ (da kīn′) originally derived from “the kind.” It refers to any person, thing, place or idea, especially when you cannot bring the word you are looking for to mind, a problem I encounter more often as I get older. The equivalent term used in Wisconsin is “whatchamacallit.” But that’s a five-syllable word! My dad shortened it to “whatch-calm.” He would have liked “da kine.” (Hawaiian Pidgin English.)

Makai ‒ (ma kī′) heading towards the sea, and Mauka ‒ (mau′ ka) heading towards the mountain or inland (both Hawaiian words). While living on the shores of Lake Michigan, we talked about something being “toward the lake” or “away from the lake”, so this new pair of directional words is familiar. They serve me well because I still do not know left from right. Given that I’m already 61, I don’t think I’m ever going to learn it. I’ve claimed this as my small dyslexia.

Stink eye ‒ a scornful look or stare. (Hawaiian Pidgin English.) My husband gives me stink eye frequently, though no one did stink eye as well as my dad. He could even do stink eye with dark sunglasses on and you still got the message.

Of all the new Hawaiian and Pidgin words I’ve learned, I like “da kine” the best. I’ve adopted it instead of making reference to my “senior moments.” Makes me feel almost local. But I’m fooling myself. I’ve only scratched the surface of the Hawaiian and Pidgin languages.

Big Island quirks to know before visiting, and

If you like my blog, please leave a comment. You may also enjoy my book, Manifesting Paradise, available on Amazon. Receive my posts automatically by filling in your email address in the “follow” box at the top of the right column. And please join my mailing list.

I'm a writer and author. Check out my book, Manifesting Paradise on Amazon, and my blog, ManifestingParadise.com. I talk about Hawaii and the transformation tools I used to achieve my dreams.
View all posts by Diane Scheurell →
This entry was posted in driving in Hawaii, Hawaii cowboy country, Hawaii's melting pot - ethnic groups, Hawaiian history, Hawaiian language, husband, learnng new things, my book and tagged Hawaiian Creole English, Hawaiian language, Hawaiian Pidgin English, Pidgin, things to know before visiting Hawaii. Bookmark the permalink.

6 Responses to “Da kine” and other useful words