Posted on December 1, 2013 by Diane Scheurell 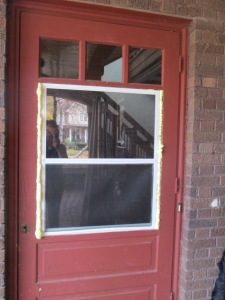 Friends are asking me how I can remain so upbeat with the renter problem I’ve just encountered. Besides owing over $13,000 in past due rent, she damaged the house while “upgrading” it to suit her taste. That included removing a load bearing wall between two rooms, painting the sunroom baseboards that BG spent hours stripping, sanding, and polyurethaning back to their original historical state, removing fixtures, and letting the yard go to weed. She painted many rooms, slopping paint on ceiling and baseboard molding, windows, and even the hardwood floors. She discarded a large rug in one bedroom and most of my window treatments and even removed a built-in window seat upstairs and a section of cabinet in the kitchen. To top it off she added a sash house window to the custom-built front storm door (everything was custom-built in 1904 when the house was built). This window still had Great Stuff oozing out: such an interesting first impression of our home for the passer-by.

There, I’ve written it down, and it’s out of my system. Really, there’s no point dwelling on the past. I’m positive something very good will come of this. In fact, we have already received many blessings with this woman as a renter. You see, it was a rent-to-own situation. We put our house on the market in the depths of the housing crisis two years ago. Only two people looked at the house in the six months it was on the market and she was one of them. So we enjoyed many positives in having her move in:

We were truly blessed and free of these worries for the past 18 months.

With her eviction, we now have another opportunity to sell the house when the market recovers. For now we’ll keep renting it, but this time with a seasoned Property Manager overseeing it, another blessing.

And even in the midst of the chaos of this past month restoring the house, a Guardian Angel showed up at my lowest point. I was one week into my search for a contractor and I only had two leads. One called me back and said he didn’t want the job – too many moving parts. The other said he couldn’t start until Thanksgiving and he didn’t refinish floors, one of the key undertakings. I was near despondent with worry. I prayed to the Universe/God for help.

I even tried to take on some tasks myself. These attempts also seemed jinxed. Greene Glass said they could fix some broken windows immediately if I delivered them. But I didn’t have tools or the strength to remove the five-foot casement windows. A young man happened to be delivering windows while the shopkeeper and I talked. When I went out to the parking lot, he approached me. “You need some windows taken out?” My dad was shouting a safety warning inside my head, but I was desperate. I decided to trust this guy. We agreed to drive directly to my house and check out the windows.

Yup, he could take them out for me. Would I like him to deliver them to Greene Glass and pick them up the next day? Was there anything else I might need done? Strip and refinish the floors upstairs that the renter sprayed paint on? No problem. Refinish the spot in the kitchen where the renter took out the cabinet exposing the old finish? Sure. Tighten the handles on the ancient doors? Had a tool in his truck for that. Create a missing screen? Absolutely – what color screening did I want? He had several at home. Fix a drawer? Of course. Swap out that broken pane of mirror in the medicine cabinet? Yes; he had mirrored glass at home too. Replace that battery in the ceiling-mounted fire alarm? Just a second while he got his ladder from his truck. Rake the leaves from the yard? As soon as the snow melted.

This young man was so can-do, so positive, that I felt better immediately. He could do anything, having learned his trade from his dad as a kid. Now he and his dad independently serviced one of the biggest property management firms in Racine.

If I needed anything during my long stay to fix the house, it was John, his attitude, and his skills. Thank you God, for sending me a Guardian Angel. 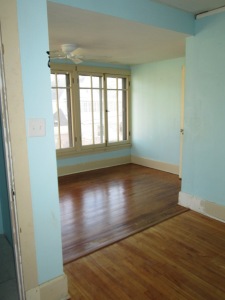 wood floors after John refinished them

I'm a writer and author. Check out my book, Manifesting Paradise on Amazon, and my blog, ManifestingParadise.com. I talk about Hawaii and the transformation tools I used to achieve my dreams.
View all posts by Diane Scheurell →
This entry was posted in asking the Universe, gratitude, Trust-Ask-Accept with Gratitude. Bookmark the permalink.

3 Responses to An Angel appeared