Our trip to the mainland was wonderful except for the weather. We fried in Washington DC with heat indexes over 100°F. Luckily, we had packed our lightest clothing. I even used my umbrella to shield me from the sun while we trudged along the Mall. Maybe I can start a new fashion trend. But it’s not likely. As we walked from the Metro, we marveled at all the women running in high heels, and men in business suits, walking quickly with purpose, not even breaking a sweat. This is about as far away from the ease of Hawai‘i as you can get.

With only two days to visit, we targeted the most important things we wanted to see. 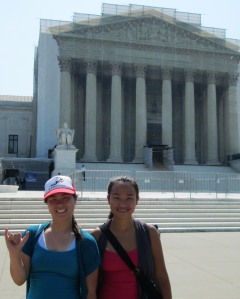 The exterior of the Supreme Court is under rennovation this summer.

Tuesday we spent the better part of the day at the Supreme Court. (Faye has high aspirations.) By the end of the day we had also seen the National Gallery of Art and Museum of Natural History, or rather, the girls had. I wandered a bit among the paintings, especially enjoying the Dutch Masters. But by the time we reached the last museum, I was suffering from the worst headache I’d had in years.

While the girls explored, I chose to sit quietly in the museum’s rotunda where I heard a mom excitedly say to her preschooler, “We’re going to see the dinosaurs!” The response, wailed in anguish: “No, I’m tired! I wanna go home!” I knew how he felt.

The next day we melted walking from the Metro to the Bureau of Engraving and Printing. When we left, I thought of a way to outsmart the weather ‒ we hailed a cab. It turned out to be a fraction of the cost of buying tickets for the open air tourist bus, and the taxi was air conditioned!

We hit the spots the girls really wanted to see: the Jefferson Memorial, the Lincoln, Memorial, and the White House. While there was no place to park near the Jefferson, our Arab driver patiently waited for the girls to sprint to the Lincoln statue and the White House while he joked that he was holding me hostage. Somehow that didn’t seem funny, though I appreciated his tolerance for the girls’ excursions.

I had psyched myself for this trip by watching the first four seasons of The West Wing. I was dismayed that there was little difference between the politics depicted then and now. We’re still fighting over the same issues; the only thing that’s changed is the cell phones. What a disappointment that we haven’t evolved farther. Our last stop was Georgetown where we had lunch and spent the afternoon touring the university with Faye.

The next day we flew to Wiscon

sin for my extended family’s annual trip to the lake up north near Boulder Junction, WI. The weather could not have been more different. We froze, even with the addition of warm clothes from the Manitowoc St. Vincent de Paul Society’s Thrift Shop. They had a sale, everything you could stuff into a paper grocery bag for $5. We bought jeans, long sleeve shirts, hats and sweatshirts.

It wasn’t enough. When the mercury outside the cottage starts at 60°F at dawn and drops during the day to 50°F by mid-afternoon, there’s no preparing for it. Of course the fish weren’t biting because the lake was still 90°F from the previous week’s heat wave.

But weather be damned. We were with family, and we had fun. My sister, Mae and I played 20 games of Scrabble, sometimes with her husband Emmet, sometimes with one of the girls. Mae’s girls and mine swiftly plotted their agenda for the week, starting with rowing and canoeing while the weather was still semi-warm. Emmet barbequed pork ribs, brats and hamburgers. There’s nothing like a grilled brat with mustard and sauerkraut washed down with Stevens Point Brewery beer. My favorite is their 2012 Black Ale: very dark with hints of coffee.

My sister Grace and I talked about favorite authors and her husband took us for a boat ride around the lake where we spotted the eagle pair at their nest, and a loon diving for fish not 25 feet from us. Grace’s daughter-in-law Phoebe held a little party to reveal the gender of the second baby, while Rachel, her daughter, entertained all of us: the kid is a comedian at 20 months. We had a ball.

Grace’s daughter Norah told me all about her new brownstone apartment in Minnesota and charmed her four younger cousins, treating them to ZotZ, a fizzy hard candy especially loved by Minnesotans, and playing Spoons with them. It’s a fast-paced card game I don’t think I want to play – looks dangerous.

Of course we went to the Boulder Junction Flea Market on Tuesday. I bought vegetables from the same farmer who comes every year. The girls even braved a day at Crystal Lake, a favorite spring-fed lake perfect for swimming. But not this year. They dipped long enough to say they’d done it and drove back to the cottages where they curled up in comforters and blankets to watch movies.

And the girls took nightly trips to town for ice cream. That scored them the biggest prize of the trip ‒ a sighting of four black bear cubs climbing trees. The mama wasn’t visible, but the girls knew better than to assume she wasn’t there. They took their pictures from the safety of the car, oohing, aahing and cooing at the baby bears.

It reminded me of evenings my parents took Grace, Mae and me to the dump to watch the bears eat when we came up here as kids. Back then we went to the Flea Market, drove to town for ice cream and complained about the fish not biting. We played cards ‒ my mom usually won, took boat rides on the lake to look for loons, and grilled brats and burgers. Mom and Dad have passed, but in some ways, not much has changed with our trips Up North since those days 50 years ago. I remember damning the weather back then too.

I'm a writer and author. Check out my book, Manifesting Paradise on Amazon, and my blog, ManifestingParadise.com. I talk about Hawaii and the transformation tools I used to achieve my dreams.
View all posts by Diane Scheurell →
This entry was posted in daughters, links to my past, Wisconsin family, Wisconsin roots. Bookmark the permalink.

2 Responses to Weather be damned