A cat recently adopted us. It was supposed to be Faye’s cat if we kept him. But when she left for Junior Lifeguarding class for two weeks, BG fed him. She’s back, but happy to let her dad continue with the work. This evening as I heard the pop and r-i-i-i-p of the metal top peeling off the wet cat food, BG exclaimed, “Bleck!”

“What are you doing?”

“I’ve been tasting these cat foods. Just in case I’m reduced to eating them in my old age, I’ll know which kind to buy.”

“I haven’t liked any of them. I think I’ll quit at this one. That’s four.”

It looks like he’ll have to keep working so he can afford people food. Besides, the person who coined the term ‘eating cat food’ to mean eating on the cheap never paid for cat food! 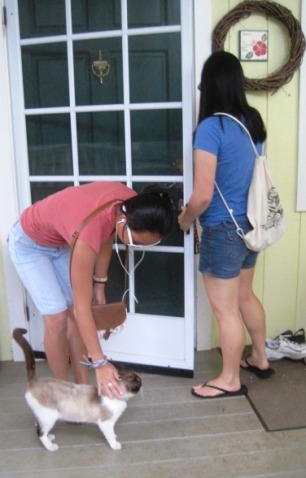 Faye named him Neko-chan, but it’s BG’s name that’s stuck – Puss. We held a family meeting, and we concluded that we should give the cat to the Asian Food Store owner whose dog disappeared and who now wanted a cat companion. We had to coerce Faye a bit, but she wasn’t playing with him anyway, just giving him the occasion petting as she came in and out of the house. We agreed to take Puss to the lady before the females of the family headed for the summer mainland sojourn. It felt like the best time.

But something happened. One day Puss disappeared. Up to that point he had stayed on the front lanai day and night, cat-napping, and rising for a head scratch or stroke when someone passed through.

On occasion he’d make a tentative foray out into the yard accompanying someone. He even went into the back yard with me a couple times to harvest avocados. One day as we did so, out of the corner of my eye I saw a streak of something flash quickly up one of the palm trees and back down – it was Puss. What was that all about?

Whatever he was chasing, it wasn’t chickens. Once again they brazenly come over at all times of the day. The good news is that these chickens are quiet. There’s only one across the street that’s loud. He’s a beauty, with many colors – quite the dandy. Luckily he doesn’t come over as often as the quiet ones.

One day BG caught Puss sitting quietly stalking, or at least intently looking at Dandy, not four feet from him in the east garden. When I came out to take a picture, he turned to me as if to say, “what do I do now?”

“Don’t look at me, go get that rooster!” Instead he came over for a petting. What’s the point of having an attack cat if he doesn’t attack? But I fear he did attack on the day he disappeared.

We all worried about him. Where was he? It wasn’t like him to be gone. BG had seen him that morning for his breakfast feeding – that was the last sighting. We called him all day. At first it was a mild annoyance, then real worry on the part of all of us.

Finally at supper time when he didn’t show up for his wet cat food meal of the day, BG went searching. He found the poor thing cowering under the front deck, and pulled him out. Puss had been attacked. He had a strange wound from his left shoulder up to his neck. His hair was missing in a section 3/8 inch by 4 inches yet the skin wasn’t broken. But his spirit was.

BG and Faye applied Neosporin and cooed soft gentle words to Puss. He slept for the next few days, not moving much, and certainly not exploring the yard. (I still don’t know if he’s pooping in his litter box or out in the yard. But since he still sometimes sleeps in his box, I hope it’s out there.)

BG said we needed to keep him until he was healed. “We can’t give him to the lady while he’s injured.” “Why not?” I didn’t get an answer.

Over the weekend Faye spent loads of time playing with Puss. He may have finally got his fill of petting and cooing.

Even our dog lover got in on the act. Jade now holds conversations with Puss through the screen door, barking, quacking, and occasionally meowing at him. She loves to take his picture and add phrases.

I'm a writer and author. Check out my book, Manifesting Paradise on Amazon, and my blog, ManifestingParadise.com. I talk about Hawaii and the transformation tools I used to achieve my dreams.
View all posts by Diane Scheurell →
This entry was posted in Animals around the house, eating right. Bookmark the permalink.