A stroll through Honoka‘a with a cat poster 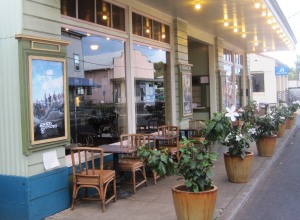 While Faye was away for two weeks at Junior Lifeguarding class, I plastered the town with a “found cat” poster. (See It’s not my cat, posted 6/22/13.) While Faye loves him, we still aren’t sure we’re keeping the cat that adopted us. Finding his owner would be the fastest way to settle the matter. Since Honoka‘a is so small, “plastering” meant five notices.

Of course I slipped one under the door at the Honoka‘a People’s Theatre. The owner, Dr. Keeney, kindly allows the community to post their messages in the large front window. He’s always upgrading that place. Recently he placed six large pots filled with white hibiscus bushes on the sidewalk out front. They’re blooming now. Then he added polished stone and iron tables and comfy cushioned chairs against the front of the building. He doesn’t seem to be concerned

that someone will steal them. I see an older solitary gentleman sitting there in the morning and kids in the afternoon. It looks real nice.

Dr. Keeney also placed a cool art deco poster in his display case announcing that the 1930-built theatre is now completely solar powered. I assume he’ll address the low water pressure in the ancient bathrooms one of these years. But we all love this theatre that is so much more than a place to see movies: it’s the heart of the town.

One of the two real estate offices on Mamane Street also accepted a cat poster. As with the rest of the nation, the housing market on Hawai‘i has improved, and prices are rising once again. But the recovery has been slow to reach our corner of the island. The gal who took the poster seemed grateful to have something to do.

Malama Market, the big grocery store in town, also has a bulletin board. The store’s big enough to have choices, and the clerks are friendly and helpful. When I went in last week for salsa to accompany the guacamole I made with my own avocados, I didn’t like the one brand of jarred salsa they had. But a clerk pointed out the fresh salsa in the refrigerated section. Choices and service – it’s a great combination.

One of my favorite moments occurred there recently. I was behind a young family at the local market getting cabbage for a recipe I wanted to try. The little boy sitting in the trolley lost his flip-flop. “Oh, my slipper!” I picked it up and handed it to him: “Here you go.” Quickly he put it on, as if showing me how fast he could do it, then he smiled up at me.

He looked puzzled. “Tell me in fingers,” he insisted.

As I spoke his eyes got wider, his mouth formed a perfect O, and his face broke into total amazement. “WOW!” He made me laugh out loud. I felt like a candidate for the commercial about telling the age of the oldest person you know. And then he had to leave with his parents. I chuckled all the way home that day.

When I went into the store with my cat poster, the manager personally took it. I know him from Third Thursday Thrive and we made small talk for a bit. I love small town life and my ability to know so many people.

Mr. Ikeuchi agreed to put a poster in his hardware store window. They have everything you could possibly want for your home projects. I like to support local businesses, so when Kim and Thomas work on my house as they have been for three weeks now, they run over there for supplies.

I’d like to say I’m doing something wonderful with the house but it’s pure maintenance. They spent the whole of last week beating the jungle back in my yard, and now they’re repairing the water rotted sections of the railing up to the ohana. At least the yard looks great now. Thomas has a green thumb. He trimmed and fertilized my orange, lemon, and grapefruit trees, and they already have new growth. 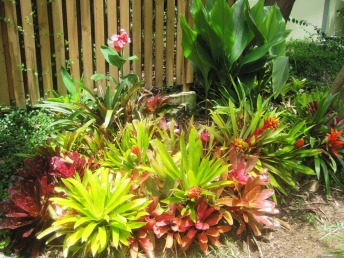 He also transplanted the unusual bromeliads from out front. They were in the coconut palm island formed by our circular driveway. The former owner put a multitude of bromeliads in this yard, perfect breeding grounds for mosquitoes. I’ve given away a bunch of the ordinary ones. But since she owned a garden center in Honoka‘a (now closed), she also planted many exotic ones with colorful blooms, mostly in that front island. I’m keeping those.

Thomas move that bunch to the east garden because (drumroll please) I have manifested the removal of the two front coconut trees! They’ve been a problem, dropping heavy fronds on my driveway, narrowly missing the car windshields. And they block the solar panels in winter, just when we need hot water the most.

Dianne couldn’t believe it. “You’ve been bitching about those trees for over a year, and now the electric company just offers to remove them for free?!”

“Yup – they said they’re interfering with the electric lines. God was listening to my prayers.”

Exasperated, she said, “That saved you what, a thousand bucks? And they asked you pretty please, could they remove the trees?”

“You should try this manifesting stuff,” I replied laughing. 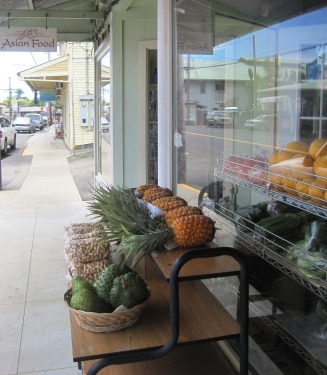 Where was I? Oh yes, cat poster. My last stop was the Asian Food store on the other side of Mamane Street. This is not to be confused with the Honoka‘a Filipino Store nearby that also offers Western Union service.

This is a small store that sells fresh Asian veggies, fruit, condiments, and canned goods. They leave some fruit and veggies on the table out front to entice you. On my way in, I noticed a basket of strange ugly fruit that looked just like the fruit on a tree in my yard. I had no idea what it was, and almost had Kim and Thomas cut the tree down. But here they were. The stylish gray-haired woman behind the counter told me they were soursop. She tried to explain their taste, then gave up and took a knife to one of them. Yum! It tasted like a cross between an orange and a banana, with a texture like the segmented flesh of a cooked lobster. I bought the remainder of the fruit. 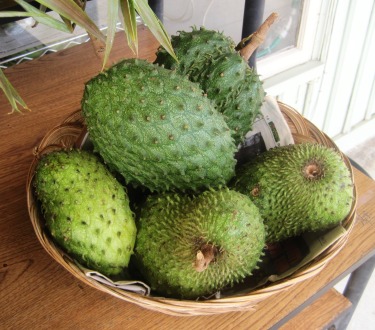 She said she was looking for someone with a tree to sell her the fruit. “I have a tree. How much are you paying?” She said she’d give me $1.50 per lb. This fruit happens to be in high demand because of its anti-cancer properties. The tree leaves also make a good tea. I told her I’d think about it. Maybe we should be eating it ourselves.

I returned to my business. She was happy to hang the cat poster  in her window, but asked me, “If you don’t find the cat’s owner, will you sell the cat?”

“I never thought of that,” I replied. “We might keep it. My daughter likes him. But I don’t know if we want the responsibility and cost. Why?”

“Someone stole my little dog, my little best friend. I’m lonely and I’d like to have a cat.” She looked so forlorn.

“Well this cat would be perfect because he’s so affectionate. If we don’t find the owner, and we decide not to keep it, I’ll give you the cat; no need to buy it from us.”

So now I had a solution for the cat as well. It was sheer luck that I had one poster left to make me stop at that shop. Or maybe I manifested it. Faye won’t be happy.

I'm a writer and author. Check out my book, Manifesting Paradise on Amazon, and my blog, ManifestingParadise.com. I talk about Hawaii and the transformation tools I used to achieve my dreams.
View all posts by Diane Scheurell →
This entry was posted in Animals around the house, Hawaii's melting pot - ethnic groups, home, Honoka'a, Honoka'a People's Theatre. Bookmark the permalink.