We had another earthquake last week. We’ve had maybe six or seven since I’ve been living here on the Big Island: six in 20 months – not too bad.

But this earthquake was the biggest and longest I’ve ever felt. The others were clearly earth movers, but more like what you feel when a huge truck rattles by on the street, and lasting about as long. This one was more, and lasted a good minute or longer. The news reported that it was a 5.3 magnitude, and occurred in the ocean off the southeast shore of the island. When it occurred, I happened to be visiting with Father Bob in his parish office in Waimea, getting his permission to mention him in my book. My husband asked me if I got down on my knees and made a last confession – how convenient to be with a priest!

But no, I didn’t think of it. I wasn’t scared, just curious. Father Bob was listening for the crash of church windows falling. Neither of us moved outside or to the door frames. In hindsight, this was a mistake. I know what to do, but I didn’t do it. Maybe I should start having earthquake drills at home. Drills are a good idea. Living in the Midwest, I always knew what to do in a tornado warning because we practiced it regularly at work and school. I learned to grab the babies and dive down to the inside-most part of the basement. Then wait.

But I haven’t lived here long enough to internalize what I need to do when the earth moves. I do find it peculiar that I’m not afraid of earthquakes anymore. Earthquakes used to be one of my worst nightmares – trapped in my car as an overpass falls on me. I would never consider moving to California. Yet I moved to Hawai‘i. Peculiar. Of course we don’t have overpasses on the Big Island. Maybe that’s why I’m not chicken.

Speaking of chickens, the Big White Rooster and the Big Brown Rooster that plagued my life are no longer with us. No, I didn’t have anything to do with it. Just one day, I noticed that I didn’t see them here anymore, nor did I hear them. Praise God! In fact, it was the day after I found someone who would gladly take a live rooster for soup – “just bring it on over.” I was so excited to find someone who would take a chicken if I caught it – my rooster bounty hunters taught me how. (See Fire Dancing Rooster Catchers posted 11/19/12.)

But apparently we now have a rowdy rooster and hen causing a ruckus at the Kona Costco parking lot. I’ve seen them a couple times. One day they apparently roosted in the back of someone’s open jeep. When the owners (perhaps tourists!) returned to the vehicle loaded with their packages, the chickens gave them hell for disturbing their nap.

The people stood around the jeep, not knowing what to do. Finally someone reached in and beeped the horn. You’ve heard the expression – madder than a wet hen? Try a hen and rooster! They flew up out of the jeep squawking, and landed a few feet away, then strutted down the lane between parked cars as if they owned the place. I guess from their perspective, they do. 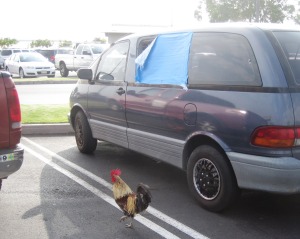 They paused near my car. I grabbed my camera to take a picture. The hen flew to the roof of the car across from me; he stayed on the ground, looking ever so like a gangster lookout. Comical. The car they were staking out had a window missing. It was covered with a piece of cloth. The hen stared at it. Next thing I knew she slipped inside the car! It was dark inside so I couldn’t get a picture of her in there, and the rooster was still standing guard anyway.

I didn’t have time to see how the story ended. But you can bet I’ll never leave my car windows open in the Costco parking lot! I wonder how long it will take before some bounty hunter captures them.

For other chicken stories see:

Veteran of the Chicken Wars

I’m chicken, and for a story that includes the cats, see

I'm a writer and author. Check out my book, Manifesting Paradise on Amazon, and my blog, ManifestingParadise.com. I talk about Hawaii and the transformation tools I used to achieve my dreams.
View all posts by Diane Scheurell →
This entry was posted in Adjusting to Hawaii, Earthquake, Kona, roosters and hens in Hawaii and tagged Adjusting to life on the big Island, chickens, Earthquake. Bookmark the permalink.

2 Responses to Chicken no more