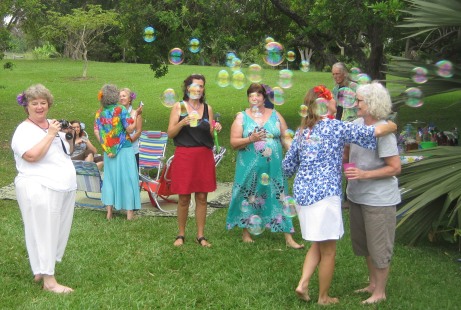 Last week I went to a birthday party at a home out past Hawi on the northern tip of the Big Island. We all love the birthday girl, Mary. The 40+ guests represented different parts of Mary’s life, so there was ample opportunity to meet new people.

As a way to break the ice, Dianne and Robin planned games – much better than the usual standing around drinking cocktails.  And it so fit Mary; she loves to have fun. When she is Queen of the Women’s Empowerment Circle we can expect to laugh and be a bit crazy. This day was no different.

All of us gals received flowers for our hair. Which ear does it go over? Soon people abandoned shoes and enjoyed the feel of the grass between their toes. I felt like I was eight years old again.

First we made bubbles, all sizes. We blew on the bubble-making hoops to make lots of small durable bubbles, swung the hoops through the air to make bigger ones, and twirled around and around to make long skinny bubbles that broke apart quickly. Julia chased bubbles with her good camera – I bet she captured some awesome shots. 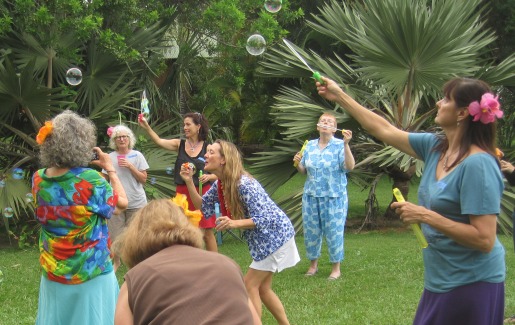 For a while it rained bubbles, showering onto faces and glasses as they broke. I gave my bubble-maker to someone else so I could take pictures. I never did get it back. Rats. We had great fun, because among us we had some people that took their bubble-making responsibility very seriously. 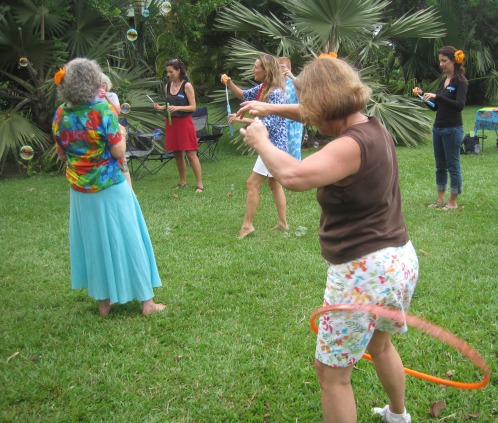 Then we tried to hoop the hula. One hula hoop was designed for little kids with no fat on their core. No one could make it spin. But Dianne was able to produce an adult size one, and of course I took up the challenge, given my one lifetime success during yoga. (See Hooping and Whooping posted 1/23/13.) Not too many people attempted it. On Monday morning my back wished that I had passed too. 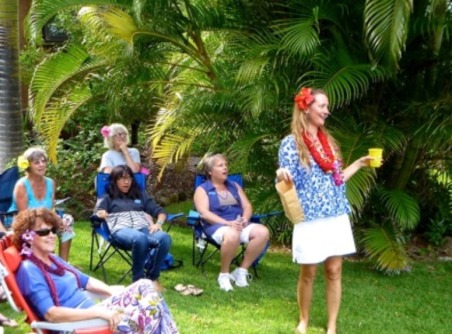 Next was Charades. Mary spent a fair amount of time organizing us. First she made them pick team names: one team was the Dolphins, the other was the Honu’s.  Then she explained all the rules and the signals. Three fingers up equals three words, two fingers tapped on the arm means two syllables, hand behind ear means sounds like, and so on. “Now, who wants to go first?”

The topic was movies, and since I don’t view many, I decided to watch. But they pressed me onto a team like the British Navy used to press citizens onto ships, when I kept guessing (often correctly) and couldn’t help shouting out answers for both teams. “If you’re going to guess, you have to play.” I became a Honu. As punishment, I had to act out the movie Dirty Dancing.  I must have done an okay job because my team guessed right away, before anyone could get a picture!

Hey, these are raw!

Lots of people played the egg toss game, much to my surprise. I think some people did not understand that while the eggs were brightly colored, they were raw. The egg-maker’s husband may have been one of those people. 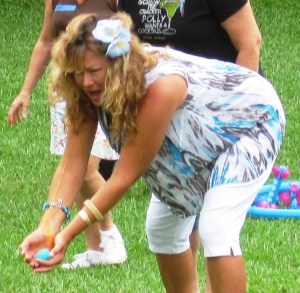 Unlike Charades, the rules of this game were not as fully explained beforehand. If you caught the egg but it broke in your hand and spattered across your clothes, did that disqualify you? Yes. “But I caught it,” she wailed. The guys seemed to have the advantage from days long gone when they endlessly threw and caught softballs. None-the-less, the birthday girl was one of the last people standing. I declined to play this game. In fact I specifically wore a dress instead of the play-clothes recommended in the invitation, because I knew about the raw egg toss. Even eight-year-olds can be party poopers.

With all of these games, it was endearing and great fun to see faces full of delight when people made and popped bubbles, hula-ed the hoop, mimed a movie title that their team got right away, or caught the egg from a long distance away.  We were all eight years old that afternoon.

Before eating, we gathered in a circle, held hands and told favorite stories about Mary. Tears flowed as easily as the laughter. It was the birthday girl herself who chanted a blessing for all, a lovely sentiment about friends being strung together like flowers on a lei.

Finally it was time for food. How interesting that of all the 35 or so potluck dishes brought, only two contained any meat at all, and both were chicken. The crowd I hang with has a decidedly vegetarian-flexitarian bent. But they served chocolate and cheesecake with raspberry sauce for dessert! My inner eight years old said “I’m having BOTH!” And so she did.

I'm a writer and author. Check out my book, Manifesting Paradise on Amazon, and my blog, ManifestingParadise.com. I talk about Hawaii and the transformation tools I used to achieve my dreams.
View all posts by Diane Scheurell →
This entry was posted in Chants and blessings, eating right, friends, Women's Empowerment Circle and tagged adults playing children's games, charades game, Mary Kuentz, raw egg toss game. Bookmark the permalink.