It feels great to be back on the Big Island after so much time away. Amy, my neighbor back in Racine, says it snowed last weekend and the weatherman is predicting snow for Friday. Some lakes in Wisconsin still have 30 inches of ice – in mid-April! Of course this gives those who naysay global warming a chance to point to the snow as evidence for their own beliefs. 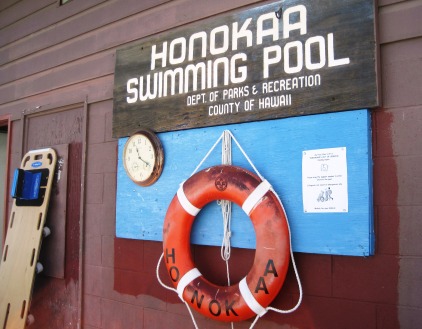 We’ve been cool here in Honoka’a as well. I’m ashamed to admit that up until last week, I hadn’t been to water aerobics since November. I was sick much of December. January and February saw frequent rain. I was gone in March. And it’s been too cold to contemplate getting into a solar heated pool that hasn’t seen any sun. Contemplation – that’s the problem.  I should have just done it. But the weather pattern broke last week and I no longer had a valid excuse not to go.

It was so nice to see all the ladies again. They greeted me with hearty hellos, though they made sure I knew they had been here aerobicizing in the water no matter the temperature. I found the water soothing, and the languid deep water exercises felt great on my back. I remembered why I love water aerobics – I can’t feel myself sweating when I’m in the water. I hate to sweat, not that I’ve done much of that lately. 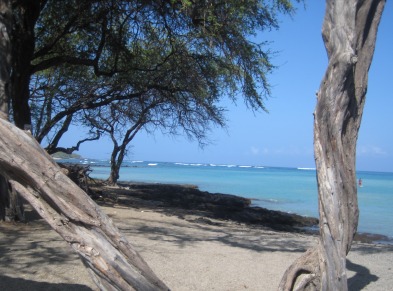 Luckily, when I’ve wanted to warm up, all I had to do is drive over to sea-level on the dry side of the island. Recently I tried yoga on the beach at Anaeho’omalu Bay in the Waikoloa Beach Resort, as our dear yoga teacher, Anita, has gone to the mainland for a while. Julia suggested I join her and friend/instructor Calley O’Neill at the Lava Lava Beach Club. I knew of Calley as an accomplished artist, but didn’t realize she taught yoga too. 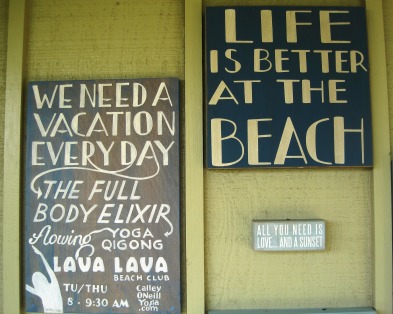 Yoga on the beach – that’s a mental Hawaiian fantasy scene if there ever was one. Sunny skies, cool breeze, ripe bodies swaying and glistening on the beach; oops – I hate to sweat. None-the-less, on a Tuesday, Dianne and I joined Julia, Calley and two other women at 8 am on the beach for the Full Body Elixir, Calley’s 90-minute flowing yoga/qigong/deep rhythmic breathing practice.  It was a commitment, as I had to leave the house at 6:30 am. 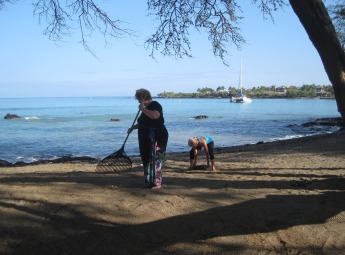 Reefs protect Anaehoomalu Bay or A-Bay as the locals call it, so it’s usually calm. But that day we had some wave action. The sound of the waves breaking on the beach and the many bird calls just added to the experience. I was pleasantly surprised to find that the beach was shaded by huge arching Kiawe trees. These are thornless Kiawe trees, a recessive trait of about 25% of Kiawe trees in Hawaii.  That’s because all Kiawe trees in the islands descended from one brought here in 1828 and planted in the corner of a church yard in Honolulu. There’s been inbreeding ever since. Looks like an improvement to me over the thorny type at Hapuna Beach. Of course if these were thorn-dropping trees, Julia’s beach raking prior to the class would have removed them. She’s thorough. 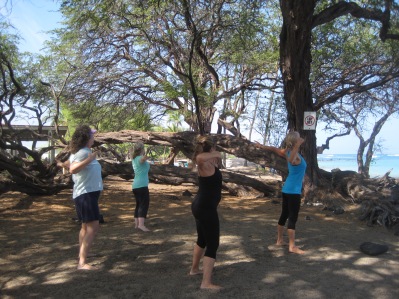 I liked the feel of digging my feet in the sand for stability. Calley explained the benefit of each movement as we copied her. I was grateful that the slow deliberate movements were easy on my body. Our pace was the rhythm of the nature around us. She describes her practice as a moving meditation. The filtered sunlight and the breeze off the ocean made me quite comfortable.  Surprisingly, I did not sweat; I was happy. 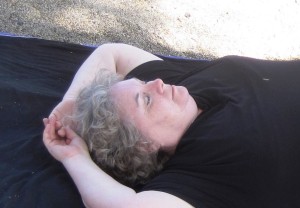 Of course, being outside on the beach under the trees can have its rare downsides: Julia experienced a close encounter with nature. About halfway through the practice, a bird pooped on the front of her black shirt. But being who she is, she exclaimed “I’ve been blessed!” and laughed. “It’s green, so it must be organic. It’s all good.” For Julia, everything is always all good. But it must have been a blessing, as Calley said that it was a first for her class. 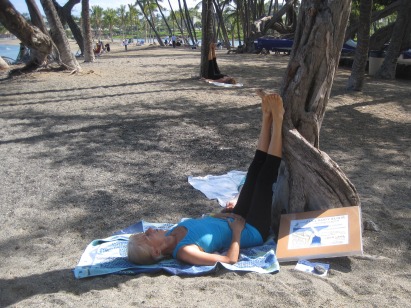 We ended with Legs up the Coconut Trees instead of Shavasana, quietly resting with our legs against the trees. But after Julia’s “blessing,” I warily put my visor over my nose and mouth and watched the branches above me for birds. I didn’t want an unexpected deposit on my face.

I had never done qigong before, and enjoyed the practice. The fluid isometric practice lubricated all my joints and despite the unhurried but deliberate pace, I felt so energized.

Calley’s regulars find working out on the beach sublime. But I knew that I wouldn’t drive all the way over there every week. I could not justify the time, an hour each way, nor the gas – not sustainable. In fact, this trip was doing double duty as I was leaving the beach to head to Kona and a maintenance appointment for the car. 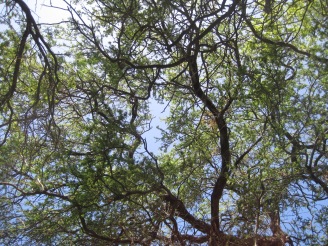 Instead I bought Calley’s DVD (www.CalleyONeillYoga.com ). I can pop it into my computer and play it anywhere, but not outside at my house.  I have way too many bromeliads with mosquitoes constantly hatching to be outside for long.

So I’ve rearranged my screened-in lanai once more to accommodate a practice space. Now I can be in nature, hearing the trade winds in the coconut fronds, the cow down the hill, the birds in the trees, and the chickens in my garden while I practice my yoga, without any flies, mosquitoes, or bird poop to spoil the Elixir. While I do miss looking up into that beautiful Kiawe tree canopy, this is the Elixir perfected. It’s all good.

Other Big Island beach essays include: 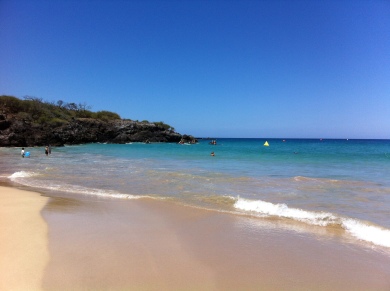 The great equalizer – the ocean at Anaeho’omalu Bay

I'm a writer and author. Check out my book, Manifesting Paradise on Amazon, and my blog, ManifestingParadise.com. I talk about Hawaii and the transformation tools I used to achieve my dreams.
View all posts by Diane Scheurell →
This entry was posted in Hawaii beaches, Honoka'a, Honoka'a Pool, self care, wet/dry side of island, yoga. Bookmark the permalink.

4 Responses to The Elixir perfected