Posted on February 3, 2013 by Diane Scheurell

Talk Story – you hear the expression a lot on island, especially in non-tourist areas.  It is the conversation of the locals, what we’d call ‘shooting the breeze (or bull)’ back home.  The Smithsonian defines it as “a Hawaiian expression, used as a noun or verb, meaning ‘an informal chat’ or ‘to chat informally.’”  It’s about sharing stories, and enjoying the company.

The phrase is also used to describe programs designed to share the culture of Hawai’i with others.  The Mauna Lani Bay Hotel and Bungalows puts on a “Talk Story” every Saturday closest to the full moon.  This blurb is from their website:

Hotel guests, Hawai’i residents, and resort employees and their families are invited to join Danny Akaka for “Twilight at Kalahuipua‘a,” a night of storytelling, music and perhaps a little hula.

Danny Akaka is the son of our recently retired Senator, Daniel Akaka.  Danny has been the cultural historian at the Mauna Lani Resort for over 25 years.  Besides hosting Talk Story, he oversees the fishponds and Kalahuipua’a, the sacred grounds located there. 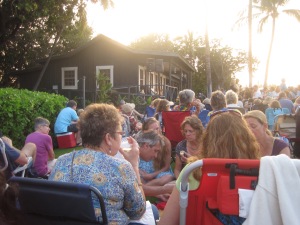 I’ve wanted to go to this event ever since I found out about it.  I’m always hungry to learn more about the cultures here.  But it is on the dry side of the island, and my reluctance to drive at night hampered my opportunities.  Last Saturday, Dianne and Mitch invited me to join them and other friends at a celebration of Dianne’s birthday with a potluck picnic at Talk Story.  Yes!

Talk Story is set up at the Eva Parker Woods Cottage right on the ocean.  One brave soul was still out there surfing in front of the cottage.  The front lanai is the stage.  Hotel guests occupy nice chairs set out before it.  Everyone else brings their own beach chairs or blankets, and spreads out wherever they find room, mostly to the north of the cottage at the edge of the ocean.  You don’t see the stage as well from the “cheap seats,” but they are definitely more fun.  We are all in groups celebrating this evening’s fellowship with food and pre-show talking story of our own.  Hawaiian music plays from the speakers while we eat and wait for Danny to start the show.

The crowd is all ages, ranging from grandmas in muumuus to toddlers in pajamas.  One baby in flowered PJs spent the evening in the arms of one or the other parent who stood, swaying back and forth.  I remember that sway.  My first chance practicing it was in the back of the airplane coming back from China with Jade; I like to say I walked from China to Georgia.  This little tyke sucked on a nook and seems to enjoy all going on around him.  When Dad had the shift, the baby dropped his nook to the ground.  Dad picked it up, sucked on it to clean it, and handed it back to the kid who accepted it readily.   Those were the days.

Another family group included an extended Hawaiian family.  The kids played with iPads, took pictures with their phones, and stretched out on the quilt or leaned against Dad or Uncle.  The youngest kept rhythm, shaking her head to the music on her iPod, oblivious to the public music around her.  Those are the days I’m living now. 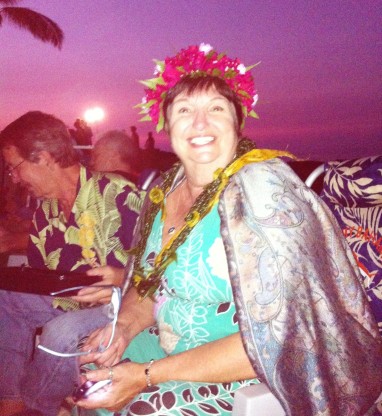 Our group was large, and we took up three “rows,” with Dianne reigning from her chair next to the ocean.  Everyone brought something to share and two birthday cakes appeared, complete with lit candles.  Julia bought Dianne a beautiful lei from a master lei maker, Aunty Maile, who was selling them behind the cottage.  It was the style one wears on the head, called haku lei, so Dianne now looked even more Queen-like with her crown of flowers.  Tanya brought her a traditional braided ti leaf lei, with palm frond ‘roses’ that she had made; so pretty.

As twilight fell, we packed up the food, faced the stage, and settled back to listen to this night’s guests, backed up by the sound of the ocean waves coming ashore.  Danny and his guests sat on rockers on the lanai.  He explained that Talk Story is not rehearsed.  It truly is whatever develops in the conversation and song.  So each month, the feel is different.  This night’s topic was the Paniolo, the Hawaiian Cowboy. 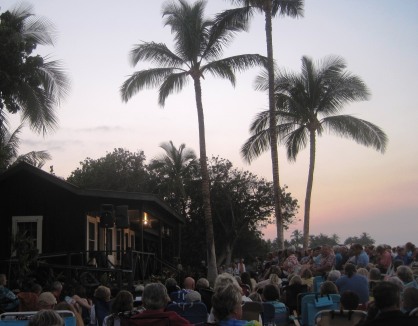 Danny started with a Hawaiian chant to honor the setting sun; the chant is about how all is cleansed at the end of the day, all is pono.

Then he introduced his guests.  Clyde Oshira from Hilo is “one of the finest guitarists in Hawaii.”  He also played the ukulele.  Danny’s story teller is Uncle Allen Wall.  Besides being the President of the Kona Historical Society, he has been a ranch worker all his life, and knew many ranching stories he could share.  “The only occupation I know is chasing cows.  I’m not suited for anything else,” he said softly but deliberately.

Danny thanked Aunty Maile for the lei she made for Uncle Allen, remarking that Paniolos often wore leis around their hat bands: “It’s a good weight to hold the hat down in the breeze.”  Then he set the stage for Uncle’s stories by telling us that the language of the ranch was Hawaiian, and that persisted until two or three generations ago.  No matter the ethnicity of the ranch hand, he learned and spoke Hawaiian.  Uncle Allen continued.  “Others my age tell me that they were not allowed to speak Hawaiian in school, and were discouraged from speaking it at all.  That was not my experience.  My family spoke it at home.”

“After college and the military I came back to Hawai’i and found no one was speaking it.  I hired on to Kohala Ranch.  I didn’t know if I knew Hawaiian anymore or not.  The old ranch hands challenged me to speak it, and I realized I did remember.  I spent lots of time with Aunty Lizzie who, when she developed dementia, reverted back to her native tongue.  And so we spoke.”

He also sang and played the ukulele.  “My stories are also songs.”  He recited the lines of his song like the poem that it was, translating each line into English.  After that he sang it.  We all laughed at one line: “Okay cow, make our day!”

“The Paniolos are the caretakers of the land.  They know what places are sacred and hidden, and need to be saved.”  They see land that no one else sees, up at elevations and with terrain difficult to reach, even today.  He told about staying with the cattle at 4000 feet.  In those days, the Paniolos didn’t return every night to the ranch, they slept in shacks up the mountain.  “The shacks didn’t have ceilings, only corrugated roofing.  The nights were cold – the temperature drops rapidly when the sun goes down on the mountain.”

Uncle Allen also told us about his family roots and another family he knows.  “We are not business associates, we are neighbors.  But we have been helping each other since 1860.  That is, our great-grandfathers knew each other, our grandparents were friends, our parents, and now us, and down to our children.”  This is part of the history that the Kona Historical Society is trying to save – the story of the immigrants and their interaction with the Hawaiians.

Some of the old stories were told to help people know when to plant, what months to stop harvesting a certain kind of fish that was spawning, or how and when to do other things related to seasons and ranching.  Turning them into songs helped people remember the information.

The songs and stories grew sweeter as the evening wore on.  Babies and adults alike began to doze as the moon came up, orange and large behind the resort.  As people packed up and slipped out, I had the chance to move to the seats in front of the lanai, where I could enjoy watching the older gentlemen play their instruments.  They were clearly enjoying themselves, as it should be when talking story.

We finished up the evening with the traditional concert closing song that everyone sings, Hawai’i Aloha.  (See Tribute to Mr. Washburn, November 30, 2012.)   Our large birthday group was still there, and we 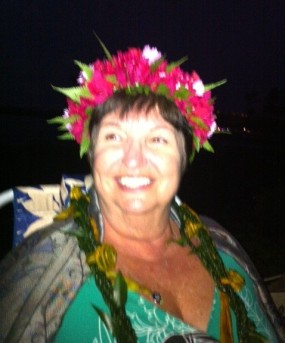 made a big circle holding hands and swaying to the music.  I haven’t learned all the words yet, but I know the melody and sang what I could, humming what I couldn’t.

It was time to go home.  The moon shone brightly to help all stumble slowly back to their cars.  I carried a very satisfied feeling, not excited, like I had just seen a fantastic concert, but content, like I had spent the night cherishing old friends.  That’s talking story.  Thank you Dianne, for planning this evening for your birthday.  And Happy Birthday, Dear Friend.

I'm a writer and author. Check out my book, Manifesting Paradise on Amazon, and my blog, ManifestingParadise.com. I talk about Hawaii and the transformation tools I used to achieve my dreams.
View all posts by Diane Scheurell →
This entry was posted in Hawaii cowboy country, music in Hawaii, Resurgence of Hawaiian Culture and tagged Danny Akaka, Eva Parker Woods Cottage, Mauna Lani Bay Hotel and Bungalows, Twilight at Kalahuipua‘a. Bookmark the permalink.